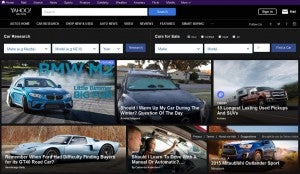 Yahoo Autos is one of several digital magazines the site plans to close in the coming weeks.

Internet publications have been blamed for the decline, and in some cases the demise, of dozens and dozens of print publications and now what goes around has come around as Yahoo announced yesterday it would eliminate its online magazines, including Yahoo Autos.

Several Yahoo Autos staffers said the last day for the site is April 29. Yahoo will pull its automotive news from other news sources.

“On our recent earnings call, Yahoo outlined out a plan to simplify our business and focus our effort on our four most successful content areas  – News, Sports, Finance and Lifestyle,” wrote Martha Nelson, global editor-in-chief, in a blog post.

Yahoo hired several big-name journalists, including Katie Couric, who left her role as special correspondent for ABC News to become Yahoo’s global anchor. Couric is not part of the layoffs, Yahoo said.

The site’s automotive publication features several journalists attracted primarily in the last 18 to 24 months from some of the country’s top publications, including Reuters, Associated Press, USA Today and the Detroit Free Press.

“As we make these changes, we acknowledge the talent and dedication of an extraordinary group of journalists who brought new and newsworthy content to Yahoo,” Nelson noted. “While these Digital Magazines will no longer be published, you will continue to find the topics they covered, as well as style, celebrity, entertainment, politics, tech and much more across our network.”

The site made the change based on a lack of revenue generated by the “magazines.” The company said earlier this month it would consider “strategic alternatives,” which ended up being the closure of its 15 magazines, for its core Internet business and cut about 15% of its workforce.

The magazines were at the core of CEO Marisa Meyer’s plans to grow the website’s readership. She plowed plenty of resources, financial and technological, to adapt Tumblr, Yahoo’s blogging network, to host the magazines. The plan was essentially to enhance the “magazine experience,” tailoring it to each reader.

(Click Here for details about the rise in car theft in the U.S.)

“You can layer in video. You can change the content. You can bring in the social aspect. You can tell someone, ‘Oh, by the way, your friend also read this article and thought it was interesting,’ ” she said in a New York Times interview. “A magazine, all 10 million copies have to be the same. Digitally, you can personalize it. You can put different advertisements that are more meaningful to the users in each one.”

The problem was that Yahoo’s personalization technology never reached readers that way as the editors of the magazines struggled with the folks running Yahoo’s home page to get the magazine’s work featured in place of the outsider-produced content that dominates the site’s main page – and drew more readers.

(To see how the Takata airbag recall could include 50 million vehicles, Click Here.)

The magazines also struggled to draw in relevant advertising. Virtually none of them were profitable, according to a person with knowledge of their finances, who spoke to the New York Times on condition of anonymity because the company considers that data to be confidential.