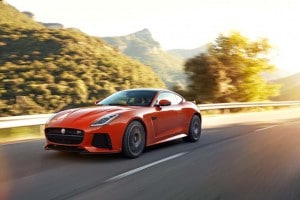 The F-Type SVR will hit 200 in coupe trim, but can only muster 195 mph with the ragtop.

Jaguar scored a big hit with the launch of its F-Type convertible three years ago, but it hasn’t been resting on its laurels, steadily adding new ragtop and convertible variants meant to boost performance and build demand.

The latest twist comes with the debut of the Jaguar yF-Type SVR – the first version capable of hitting 200 mph. Officially, the public won’t get a first look until early next month, when the British maker rolls out the new supercar at the 2016 Geneva Motor Show, but we’ve gotten our digital hands on some details and a few images ahead of that official debut.

“Our objective was to take everything that our customers love about F-Type – the performance, the handling, the sound, the design – and take it to a whole new level,” says John Edwards, the managing director of Jaguar Land Rover Special Operations. “It’s a 200-mph all-weather supercar.”

As with the rest of the F-Type line-up, the SVR will be available in both coupe and convertible body styles – though the ragtop sacrifices a bit of speed, managing to hit “only” 195 mph, according to Jaguar. 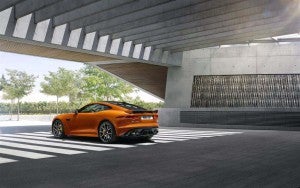 The SVR borrows the powertrain initially developed for the limited-run F-Type Project 7.

Both configurations are powered by a supercharged 5.0-liter V-8 making 575 horsepower and 516 pound-feet of tire-spinning torque. The engine was adopted from the F-Type Project 7 concept study which itself evolved into a limited-run production model.

Then first F-Type model to wear the SVR badge, Jaguar claims the supercar can launch from 0 to 60 in just 3.5 seconds.

To deliver that performance, Jaguar did more than just beef up the F-Type SVR’s power. Engineers upgraded the electronic rear limited-slip differential, while tweaking the calibrations of the Quickshift gearbox, the all-wheel-drive and other systems. The SVR features a modified torque vectoring system, and updated dynamic stability control. 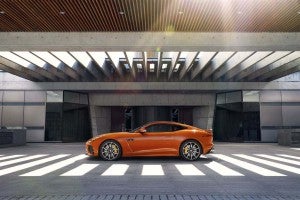 The SVR is as much as 100 pounds lighter than F-Type R, if ordered with carbon brakes.

(Jaguar Land Rover will eventually go electric – but not yet, says CEO. Click Here for the full story.

Already known for its distinctive exhaust note, Jaguar has adopted an Inconel Titanium exhaust system for the F-Type SVR that, it suggests offers a “more purposeful, harder-edged sound.”

The F-Type chassis has been upgraded with new dampers and anti-roll bars, and wider tires mounted on the unique, 20-inch alloy wheels.

The SVO team also shaved about 55 pounds of mass compared to the already impressive AWD F-Type R – a figure that jumps to 110 pounds if a buyer opts for the carbon ceramic matrix, or CCM, brake system. 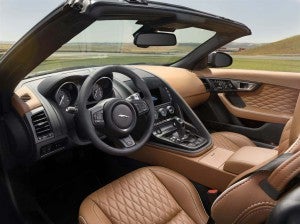 The 2017 Jaguar F-Type SVR will be offered in both coupe and convertible body styles.

Inside, there are custom SVR seats, a sueded instrument binnacle, a special SVR steering wheel and anodized aluminum paddle shifters. And the F-Type SVR comes stock with a 770-watt Meridian sound system as part of its infotainment package.

The British arm of India’s Tata Motors is already taking orders ahead of the F-Type SVR’s Geneva debut on March 1st. In the U.S., the Coupe will start at $125,850, the Convertible at $128,800 – plus delivery charges. Deliveries will begin over the summer.