Infiniti Powers Up with Three New Engines for Q50 Line 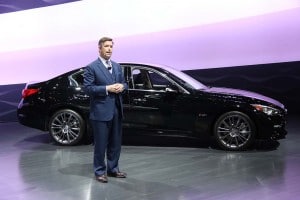 Long stuck in the second tier of luxury brands, Infiniti hopes to come out from the shadows with an assortment of new models and powertrains, and a bigger emphasis on performance.

Nissan’s high-line marque is giving a taste of what it has in mind as it reveals three new powertrains for the new Q50 sedan at a Chicago Auto Show event, including a package it has dubbed the Q50 Red Sport 400.

“We are completely transforming the Infiniti model lineup this year with all-new models like the QX30 and Q60 sports coupe, major makeovers such as the QX60, and cutting-edge powerplants like the Q50’s three all-new turbocharged engines,” said Infiniti Americas Vice President Randy Parker.

(Click Here to check out the new Infiniti Q60.)

The three new engines include a turbocharged 2.0-liter four that it is producing at a plant in Decherd, Tennessee. As part of an expanding alliance with Germany’s Daimler AG, the engine is also being used in some new Mercedes-Benz models. In the Infiniti Q50, it makes 208 horsepower and 258 pound-feet of torque and can be ordered in both rear- and all-wheel-drive configurations. 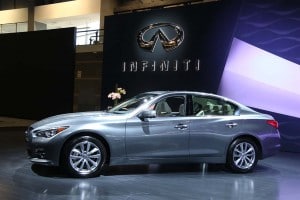 The new Infiniti Q50 will be offered with three normal powertrains - and a hybrid option.

The step-up option is a turbocharged 3.0-liter V-6. The package uses both an intercooler and an electrically powered intake valve timing system to boost performance and throttle response. It turns out 300 horsepower.

But the big gun for the Q50 will be an even more advanced version of that V-6 that adds such high-tech touches as a turbo speed sensor and dual water pumps. That helps the engine punch out 400 hp and 350 lb-ft of torque.

The debut of the VR V-6 will also mark the introduction of the new Infiniti Red Sport line, the brand’s direct answer to such competitors as the Lexus F-Sport, BMW M and Mercedes-Benz AMG. Infiniti has been studying the idea of a dedicated performance line for some time and toyed with an earlier sub-brand concept dubbed Eau Rouge, named for one of the legendary corners on the Spa circuit. 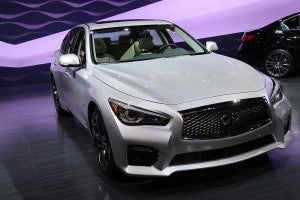 The new turbocharged 3.0-liter V-6 uses both an intercooler and an electrically powered intake valve timing system and puts out 300 horsepower.

The Infiniti Q50 Red Sport 400 will deliver more than just 400 hp, the maker notes. Buyers will get a new Dynamic Digital Suspension, and they will have the option of ordering either a performance-tuned rack-mounted electronic power steering system or an updated version of Infiniti’s unique Direct Adaptive Steering.

From a visual standpoint, the Red Sport version of the Q50 also will be distinguished by its brushed finish exhaust tips and unique 19-inch alloy wheels.

Along with the three new gasoline engines, the Infiniti Q50 also will be available with a 360 hp hybrid option.

The Infiniti stand at the Chicago Auto Show is a very different one from a year ago, the maker displaying an assortment of new models, including the big QX60 crossover and the all-new 2017 QX30 crossover set to go on sale in mid-2016.

(Nissan ships new Armada to Chicago. Click Here for a look at the completely redesigned SUV.)