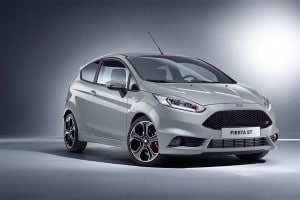 The new Ford Fiesta ST200 can make up to 217 horsepower in its overboost mode.

Ford is heating up the hot hatch wars with the Geneva Motor Show debut of the new Fiesta ST200.

Already one of the sportiest entries in the subcompact class, the new Ford Fiesta ST200 gets a big pump in performance out of its 1.6-liter EcoBoost enging, generating up to 212 horsepower and 236 pound-feet of torque in overboost mode.

“The ST200 takes this special drivers’ car to a new level of power and performance,” said Joe Bakaj, vice president, Product Development, Ford of Europe. “I think it’s a future classic in the.”

The upgraded Fiesta ST200 also gets a number of changes meant to enhance improved steering and handling, including a new torque vectoring system, and improvements to its electronic stability control, Ford claims.

Geneva is the appropriate place for Ford to show off the ST200. The Fiesta ST made its official debut there four years ago in production form, coming to market for the 2013 model-year in Europe, and reaching U.S. shores a year later. 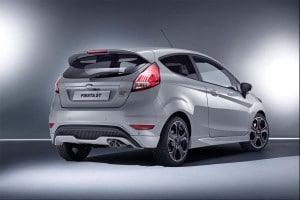 Ford makes the Fiesta ST models in both 3- and 5-door hatchback body styles.

The current model churns out a solid 180 horsepower from that turbocharged 1.6-liter inline-four. The EcoBoost engine was upgraded with features like Twin-independent Variable Camshaft Timing and overboost letting it surge up to 197 hp and 180 lb-ft of torque for 15 seconds.

Other chances meant to improve ride and handling include:

Whether the new version will make it to the U.S. market is “too early to comment,” according to a Ford official. But it will reach European markets later this year.

The ST200 will have a relatively short life, however, with an all-new version of the subcompact Ford Fiesta due to make its debut sometime next year – possibly in Geneva.