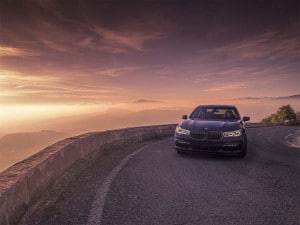 For those who mourn the lack of a BMW M7, there is a stylish and sporty alternative, and it’s getting a complete remake for the 2017 model-year.

Despite the rapid expansion of its “M” line-up, with models like the new M2 and X4 M40i, the Bavarian maker has long resisted calls for an ultimate, performance edition of the big 7-Series sedan. But long-time affiliate Alpina has been filling in the blank, and its back with a third-generation model, this one based on the all-new BMW 7-Series launched last year.

The 2017 BMW Alpina B7 xDrive gives the new 7-Series not only a performance boost but delivers its 600 horsepower through all four wheels. The sedan gets a number of other power, performance and luxury enhancements, inside and out.

Founded by Burkard Bovensiepen in 1965, Alpina has worked its magic on a number of different models over the years, but the makeover of the new 7-Series is clearly its most extensive effort yet. 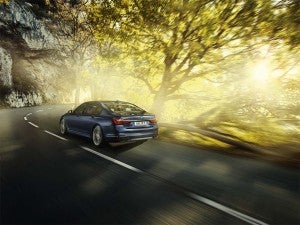 The 2017 BMW Alpina B7 starts out with the same 4.4-liter biturbo V-8 found in the stock BMW 750i. But Alpina engineers have made a number of modifications to the air intake system, the intercooler, the twin turbos and the new stainless steel exhaust, punching up engine output to 600 horsepower and 590 pound-feet of torque.

Power is channeled through an 8-speed automatic tuned to handle the extra torque. The modified BMW xDrive system helps ensure power reaches the pavement, “allowing it,” BMW says, “to sprint from 0 to 60 in just 3.6 seconds.”

Of course, BMWs are more than just straight line sleds, and Alpina has taken a number of steps to enhance handling, as well. That includes a number of suspension and chassis modification, as well as the first use of what it calls Integral Active Steering. That allows the rear wheels tp turn a few degrees each way, depending upon whether the car is running at low or high speeds.

(Is the new Cadillac CT6 ready to challenge BMW’s best? Click Here for a review.) 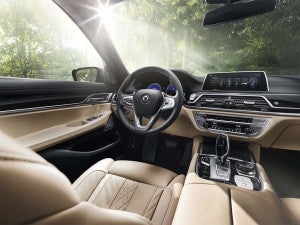 The Alpina's interior features a number of subtle enhancements to the stock BMW 750i.

The twin-axle air suspension system is combined with such features as Dynamic Damper Control and Active Comfort Drive. Among other things, the vehicle’s ride height can be raised or lowered by nearly two inches. At high speeds, it drops nearly an inch to improve both stability and aerodynamics, BMW explains. But at low speeds, it can be raised up to improve ground clearance on rough roads.

The driver can use the Electronic Damper Control system to switch from smooth and easy cruising mode to something more suitable for high-speed driving. The system adjusts a wide range of vehicle functions, including throttle, transmission, ride height and suspension settings.

The stock 7-Series body has also been tweaked to improve both appearance and aerodynamics, BMW explains. Front and rear lift have been all but eliminated, while wide front openings enhance engine cooling. The familiar BMW kidney grille itself is now fitted with automatic shutters that reduce drag when cooling demands are low. 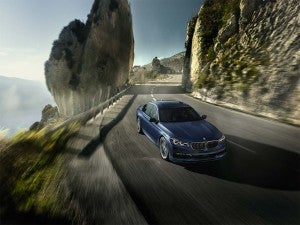 The 2017 Alpina B7 also features a number of aero, chassis and suspension enhancements.

The Alpina B7 will continue to offer the many safety and comfort features first introduced on the 2016 BMW 7-Series makeover, including the unique gesture control system that can operate vehicle functions such as the infotainment system.

Expect to see the new model, Alpina’s third take on the 7-Series, roll into U.S. showrooms in September 2016. Pricing will be announced closer to launch.

(Click Here to see how BMW is redefining the “ultimate driving machine.”)