Inflator problems could be far more widespread than initially expected.

So far, about 24 million vehicles using Takata airbags have been recalled in the U.S.

In recent weeks, a long list of automakers, including Volkswagen, General Motors and Honda, have added millions to the list of vehicles recalled due to faulty Takata airbags. So far, a defect blamed for at least 11 deaths has affected about 24 million cars, trucks and crossovers.

But that number could triple. As many as 50 million other vehicles are equipped with airbag inflators supplied by Takata, and a number of lawmakers, regulators and safety experts are pressing to have them recalled, as well.

Where the Takata problem was originally thought to be caused by a manufacturing defect and limited to vehicles used in regions, like Florida, with high humidity, there’s growing concern that the basic chemistry used by Takata is flawed and, as a result, any vehicle using the Japanese supplier’s inflators, are increasingly at risk as they age.

Compounding the issue is that fact that no one is yet sure exactly what is causing some airbags using Takata inflators to misfire when triggered by a crash. If that happens, metal and plastic shrapnel can fly into the passenger compartment. All but one of the deaths have involved Honda products, though the most recent incident, which occurred on December 22, 2015, occurred in a 2006 Ford Ranger, and took the life of 52-year-old Joel Knight. 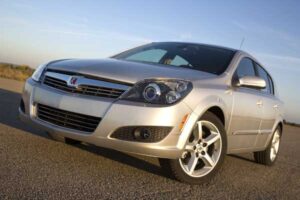 Saturn's Astra is one of the latest vehicles involved in the ongoing Takata recall.

The first few incidents occurred in places like Florida, where high humidity was believed to compound a manufacturing defect that occurred at two Takata plants in North America. The thought was that excess moisture could cause the chemical used as a propellant, highly explosive ammonium nitrate, to misfire.

But Clarence Ditlow, the director of the Washington-based Center for Automotive Safety, told TheDetroitBureau.com, that there is growing concern that this propellant will break down on its own as it ages, especially when subject to the harsh conditions airbags must live in within a vehicle.

A consortium of automakers has been researching the problem, so far with no firm conclusion. But if it turns out ammonium nitrate is the cause, Ditlow and others contend, any airbag using Takata’s inflators, is at risk of malfunction. And, according to a report by the Associated Press, that would involve “as many as 50 million Takata air bag inflators in cars that have yet to be called back for repairs.”

(Daimler recalls over 800,000 vehicles due to Takata issue. Click Here for more.)

Initially skeptical of such claims, the National Highway Traffic Safety Administration has been pressuring Takata – and the automakers who use its products – to expand their own investigations. It already appears the issue isn’t just limited to decade-old vehicles. GM this week recalled some Saturn and Saab vehicles produced as recently as the 2011 model-year.

And where the initial focus was on a single, driver’s side airbag model, there have now been reports of malfunctions involving both frontal passenger airbags and airbags used elsewhere in the vehicle. A woman was seriously injured last year when the side airbag in a Volkswagen SUV she was driving misfired during a crash.

“Recent events and recalls involving relatively new vehicles with these types of inflators raise serious questions as to whether Takata’s ammonium nitrate propellant is inherently dangerous,” Sen. Bill Nelson, a Florida Democrat, wrote to NHTSA Administrator Mark Rosekind on February 10. “I am concerned that the current approach may be needlessly incremental and fail to adequately protect public safety.”

Some in the industry are concerned about the problems that any massive new Takata recall would cause. A number of vehicle owners have reported being unable to schedule repairs to replace the airbags in their vehicles because of a shortage of parts.

Under pressure from NHTSA – which levied a $70 million fine last November – Takata has been ramping up production and can now supply the 14 automakers so far involved in the recall with 1.5 million replacements each month. Some of those must go to other markets, however, the AP reported, where 30 million vehicles have also been covered by Takata recalls.

Some automakers are seeking out alternative supplies. Toyota has turned to another vendor. It has also said it will no longer use Takata inflators – even though the Japanese supplier has promised to stop using ammonium nitrate. Honda, Takata’s largest customer, also has severed ties with the supplier.

Other makers have taken similar steps – which could cause still further problems. With its revenue stream dwindling, Takata could be hard-pressed to meet demands for even more replacement inflators if the recall continues to expand.

(German supplier Continental has its own airbag problems. For more, Click Here.)