“Plenty of room” to boost performance of new supercar. 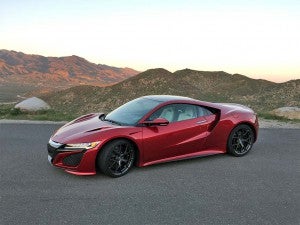 Acura began taking orders this week for the all-new 2017 NSX, marking the return of the 2-seat supercar after a decade’s absence.

The new model isn’t just an update of the old NSX. Acura has opted for a unique new hybrid drivetrain pairing a twin-turbo V-6 with three electric motors. The package delivers a solid 573 horsepower and 476 pound-feet of torque, enough to hit 60 in well under four seconds, according to preliminary tests.

But in a world where even 600 horsepower has become almost commonplace, Acura insiders told TheDetroitBureau.com that they’re looking at ways to bump power and performance up another notch or two – and that could mean the introduction of an even more extreme Acura NSX Type-R within the next several years.

(From Insight to NSX, Honda expects green cars to dominate its line-up. Click Here for the story.) 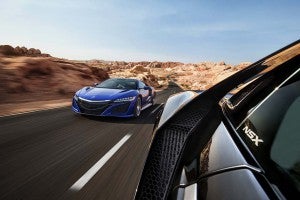 Going by the numbers can be a bit misleading when it comes to the 2017 Acura NSX. The unusual, hybrid drivetrain is actually quicker than a first read might suggest. That’s because of the layout of the supercar’s drivetrain and the nature of electric motors.

Traditionally, supercars relied on large displacement internal combustion engines, whether V-8, V-10 or V-12. A growing number of models have begun opting for downsized engines using turbochargers as a replacement for displacement. The downside is that turbos typically need to “spool up.” They have to get spinning fast to help boost an engine’s power. That results in dreaded turbo lag.

New turbocharger designs can reduce that delay, and Acura opted to pair two turbos with the NSX V-6 to minimize lag. But the real solution comes with the added use of three electric motors, one directly paired to the V-6 and driving the rear axle, the other two motivating the front wheels.

Unlike a gas engine, turbocharged or naturally aspirated, electric motors deliver maximum, tire-spinning torque the moment they are switched on. As a result, the three motors on the NSX fill that momentary void, bringing on a neck-snapping burst of power while the gasoline side of the powertrain is building momentum. 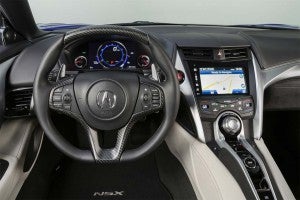 The challenge for NSX engineers, explained several members of the development team, was delivering enough energy to take maximum advantage of the sports car’s three motors.

The NSX has a relatively small – roughly 1 kilowatt-hour – lithium-ion battery. As a hybrid, it is charged up when the car brakes or coasts, with power being sent to the three motors when the driver’s foot mashes the throttle. In current form, the rear motor is rated at 47 hp and 109 lb-ft, the front motors each producing 36 hp and 54 lb-ft of torque.

But the motors actually could deliver significantly more power if they could get the energy quickly enough from the battery pack, TheDetroitBureau.com was told. That is something NSX engineers plan to work on. Options include a larger battery pack, revisions to the chemistry of the battery to allow the faster flow of energy in and out, and upgrades to the NSX power electronics system. 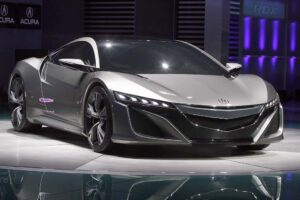 Acura made a number of changes to the NSX concept first unveiled in 2012.

Tesla Motors recently announced its new Ludicrous Mode for the Models S and X that will radically improve power flow to the motors, allowing the sedan model to launch from 0 to 60 in just 2.9 seconds, the SUV only slightly slower.

More power could be punched out of the 500-hp 3.5-liter V-6, Acura insiders also explained, noting that at 143 hp per liter, the specific output of the engine is impressive, but far from nearing the limits of its design. Even increasing output by 10 to 20 horsepower per liter would yield measurable performance gains. Revisions to the turbocharger are among the options available.

With three motors and a lithium battery pack, as well as a twin-turbo V-6, the new NSX is far from the lightest vehicle in its segment, weighing in at 3,803 pounds in stock form. Buyers can shave weight in a number or ways. There are optional carbon fiber components, such as the alternate roof panel. And the carbon ceramic brake option trims more than 50 pounds of unsprung mass.

But, a senior source noted, an Acura NSX Type-R would likely take even more aggressive measures to lose mass. That could mean foregoing the standard power seats, for example, some noise insulation and some of the car’s electronic components. 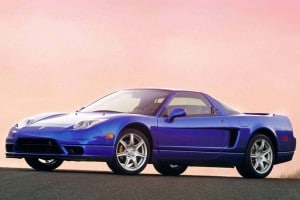 And Acura engineers expect to see improvements on the hybrid side of the drivetrain. In the coming years, they expect to see lighter, more powerful batteries, for example, and anticipate smaller, lower-mass motors and power electronics.

How much more the team could lightweight the car hasn’t been determined, however.

While insiders stressed there is no formal NSX Type-R program yet underway, brand chief Jon Ikeda said that Acura “won’t stand still” with the new supercar. Like key competitors, it expects to be continuously looking for ways to enhance the supercar’s performance and handling over the course of its lifecycle. So, whether or not a dedicated Type-R is approved, the new NSX is likely to get even better in the years ahead.