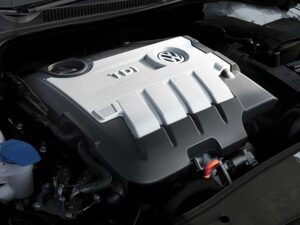 There have been three versions of Volkswagen's 2.0-liter diesel sold in the U.S., and their problems may have killed the diesel market here.

The emission-test cheating scandal that has engulfed Volkswagen’s could kill the markets for diesel cars in North America, Japan and China, the chief executive of one of the world’s automotive supplier, Continental AG, told a German newspaper.

“The diesel passenger car could sooner or later disappear from these markets,” Elmar Degenhart predicted in an interview with Boersen-Zeitung published on Thursday.

He added that diesel had a marketshare of only 1% to 3% in these countries, compared with 53% in Europe where tax breaks have helped fuel the expansion of the demand for passenger cars and vans powered by diesel engines.

The Volkswagen scandal, however, has also called attention to the considerable health-risks associated with diesel exhaust, according to new reports emerging from Europe where a number of major cities including Milan and Rome have taken steps to reduce vehicle traffic.

The diesel exhaust standards in Europe, which are a lot less stringent than in the United States and the state of California has substantial influence, have come under new scrutiny in the wake of the Volkswagen scandal.

Meanwhile, China, which faces considerable pressure from ordinary citizens to clean up the quality of the air in major cities, is pushing carmakers to avoid the introduction of diesel-powered vehicles.

Volkswagen, Europe’s biggest carmaker, had been promoting diesel as a clean alternative to gasoline in the United States, a market where it was struggling for a breakthrough, before the cheating came to light in September.

Degenhart said Continental had not supplied any software to manipulate emissions tests to any of its clients, reiterating what a company spokesman told media in October.

“We developed and supplied the engine controllers in line with VW’s specifications. The installation and tuning of the software, the so-called calibration, was done by VW,” he said.

He added that Continental was not aware of any legal investigations against it in connection with the scandal.

(Click Here to see how the new Paris climate accord will impact motorists.)

Bosch, the world’s biggest automotive supplier and one of Continental’s major rivals, are being investigated by public prosecutors in the German city of Stuttgart to find out whether they were involved in VW’s test-rigging.

“The likelihood that we will begin to support the building of this new business with acquisitions is relatively high,” Degenhart said, adding that large acquisitions were possible but unlikely in this area and not currently planned.

“We are convinced that it is only a matter of time before electromobility, and there I include hydrogen power in the long term, prevails,” Degenhart said.

(Click Here for more on the Chinese red alerts.)

But he said the price would have to fall below $109 per kilowatt hour of storage capacity from 250-300 euros currently for electric cars to succeed, according to a report by Reuters.