Two-tone pastels, “secure” blacks and blues, high-tech golds among the likely trends of 2019. 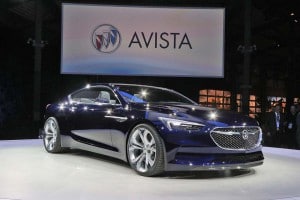 Buick opted for a paint so dark you might think it was black, not blue, depending on lighting.

When designers pulled the concept car together, they spent nearly as much time coming up with the right, dark blue paint color as they did on Avista’s sheet metal. And the Buick team wasn’t alone. Whether ticket-me-red, sunburst orange or elegant white, color is critical to designers hoping to make their production cars and concepts pop on the auto show floor – and in the showroom.

“When you buy a car, your friends are likely to ask, ‘What did you buy – and what color is it?’” suggests Jane Harrington, the manager of color styling for PPG Automotive Coatings.

Whether you’re an automotive designer, or a car buyer, the color you choose is likely to be influenced by a wide variety of factors. There are, no surprise, regional differences. What’s hot in Hong Kong may not be nearly as big in Boston. Studies show that color choices are influenced by factors such as the economy, and even whether the country is at war.

And, of course, there’s a strong influence from the fashion world. When Ralph Lauren turned Hunter’s Green into one of the must-have hues of the 1980s, it soon became one of the hot automotive shades, as well, recalls Harrington, as she offers a visitor a tour of PPG’s annual color show.  It’s a collection of paint shades the supplier expects will be especially popular with consumers in 2019. 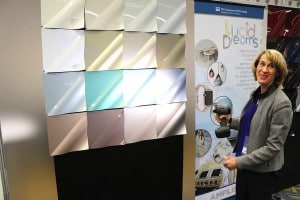 Wielding a crystal ball is never easy. And even the savviest fashion designers can call it wrong when they try to anticipate what will be hot next season. But because of the traditionally long lifecycles in the car business, experts like Harrington have an even more serious handicap. They’ve got to predict what will be in the “in” colors three years ahead.

The current color show is organized into four distinct groups, including one dubbed, “The Influence of Technology.” That should be no surprise considering how much technology is going into today’s cars, from the latest infotainment systems to the battery-based drivetrains under the hood.

“I definitely think it’s going to have an effect” on what consumers want, Harrington says. But she also cautions that works on an iPhone won’t necessarily come together on a car. The distinctive white hue was wildly popular on early Apple phones didn’t play nearly as well when Chevrolet started using it on the instrument panel of its first-generation Volt plug-in hybrid.

More likely, technology will translate into vibrant oranges and golds,” she adds, noting those hues “have been trending. Those types of colors vibrate energy.”

(Automakers pairing up with the Internet of Things. Click Here to find out what that means for the future.)

At the other extreme is a group of soothing shades lifted from stones and rocks. A third color group, dubbed “Lucid Dream,” focuses on more classic pastels.

Don’t be surprised to see purples, as well as those energetic oranges and golds three years from now. But for all the effort that goes into coming up with such distinctive hues, Harrington notes that a handful of colors have, and likely long will dominate the sales charts.

Silver has been the top-seller for more than two decades though, Harrington points out, “Last year there was a huge jump in the popularity of white, largely due to the influence of China.” 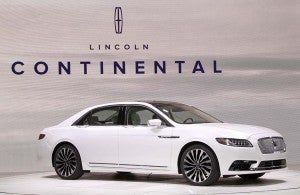 Lincoln opted for a version of ever-popular white to debut the production Lincoln Continental.

Grays – not to be confused with silvers — are gaining ground. And the other go-to colors include black, blue and red.

Sticking with “colors that have more longevity makes sense for automakers,” Harrington says. You have to give buyers what they want, and the vast majority of them play it safe. That’s no surprise if, for no other reason, the fact that an unpopular paint color can take a big hit on a vehicle’s trade-in value.

In planting paint trends, it sometimes pays to look in the rearview mirror. Harrington notes that several manufacturers have been tinkering with two-tone looks, a scheme wildly popular in the 1950s. It’s costly and difficult to pull off in modern paint booths, however, and likely won’t become a widespread trend.

A closer look at the paints Harrington and her team have picked reveals that the various hues on display aren’t just subtle tweaks of tones we already know. Paint suppliers like PPG and arch-rival DuPont, are coming up with more and more sophisticated takes on familiar colors.

She points to new finishes that, at first glance, seem almost as solid as a ceramic. But as you get closer, you start to see there’s a clear metal flake to the finish – something Audi opted for with its h-tron Quattro Concept at this year’s Detroit Auto Show.

Other paints are designed to reveal different colors, depending on whether you’re looking at the “face,” or the “flop,” approaching the car from different angles to see what initially seemed black is suddenly blue and now purple.

In an era when cars are doing more and more of the job of driving, he suggests, picking the color that reflects one’s personality just may be “a way for consumers to take some of the control back.”

(Millennials aren’t the only ones who’re not worried about driving. Click Here for more.)