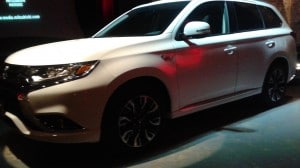 Mitsubishi gave the media a quick peek at the new Outlander hybrid coming to the New York International Auto Show.

Mitsubishi plans to have the plug-in-hybrid version of the Outlander sport utility market ready in late August, company executives said during a visit to Detroit ahead of the North American International Auto Show.

As part of the visit, Mitsubishi offered up a glimpse of a prototype of the production the 2017 Outlander PHEV.

The 2017 Outlander PHEV, which will have its formal introduction this spring at the New York International Auto Show, will have the same basic dimensions as the Outlander but two rows of seats rather than three to accommodate the battery that will allow it to travel on electric power only. The vehicle also be outfitted with high-tech driver assistance feature, said Mitsubishi spokesman Alex Fedorak.

Mitsubishi’s sales increased 23% in 2015 and comes on the heels of a double digit-gain in 2014, Mitsubishi, according to Ken Konieczka vice president of sales operations.

Bolstering the company utility vehicle line is now the company’s top priority as it takes aim at selling more than 100,000 vehicles in 2016, he said. Utility vehicles now account for more than 60% of the Mitsubishi’s sales in the U.S.

Francine Harsini, director of marketing, suggested the thorough refresh of the 2016 Outlander has helped attract buyers that Mitsubishi had not been able to reach in recent years. Buyers of 2016 are younger and wealthier, she noted.

But they are also value conscious and were obviously attracted by the pricing of the Outback – $23,000 fully equipped – which the automaker emphasized during beefed-up advertising campaign, Harsini noted.

“We put a little more money behind it and it worked,” she said, noting the Mitsubishi ads showed up in places, like football telecasts, where the hadn’t been in recent years.

Konieczka noted that the refreshed Outlander is doing significantly better than Mitsubishi executives first expected last summer. “I think we said we expected to sell about 1,500 per month but we’re actually doing around 1,800 month,” he said, adding the previous version of the Outlander was selling about 1,000 units per month.

The Outlander Sport, the two-row crossover, remains the most popular vehicle in the in the Mitsubishi portfolio, selling better than 3,300 units per month, according the latest sales figures from the company.

(To see more about the debut of the 2016 Mitsubishi Lancer, Click Here.)

On the passenger car side of the business, the redoubtable Lancer continues to hold its own but a replacement vehicle seems a way off. Discussions with Renault Korean off-shoot about joint development of a new platform that could serve as the basis for a replacement for the Lancer, fell apart last summer and haven’t been revived, Mitsubishi officials observed.