Technically, it's a concept vehicle, but the Kia Telluride signals the brand's desire to get into the large SUV segment.

You can call the Kia Telluride a “concept” vehicle, if you wish, but the Korean carmaker is quick to suggest the show car is “grounded in reality.”

Also known as the KCD12, the 7-passenger SUV is more than a bit likely to reappear in production form in the not-too-distant future, Kia officials said as they prepared to roll out the Telluride at the 2016 North American International Auto Show.

“The Kia Telluride makes an aesthetic statement for the Kia brand,” said Tom Kearns, chief designer, Kia Design Center America. “Longer, wider and taller than the recently redesigned Sorento CUV, Telluride allows us to envision what a full-size seven-passenger SUV from Kia could look like.”

The debut of the Telluride concept is no surprise – nor would the launch of a production version. Sales of utility vehicles – both conventional sport-utes and car-based crossovers — outpaced the growth of the overall U.S. market last year. Indeed, CUVs and SUVs collectively fell just short of outselling all sedans for the first time. 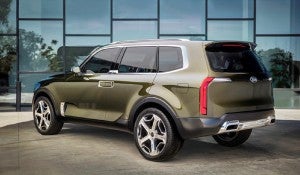 Also known as the KCD12, the Telluride is Kia's move into the larger scale SUV/CUV market.

Kia – like the sibling Hyundai brand – has scored some successes in the ute market with models like the Sorento, but it could use more models in its line-up to take full advantage of this dramatic market shift.

At 196.9 inches in length, the Kia Telluride would target the large end of the SUV spectrum, with competitors like the Toyota Sequioia.

At first glance, the Kia Telluride concept looks a lot like a conventional, 2-box SUV, but a closer look shows it pushing the design envelope. For one thing, its front and rear-hinged back doors swing open in opposite directions. That helps create an especially expansive interior, though so-called suicide doors have rarely made it into production.

The cabin is roomy enough for those in the middle row captain’s chairs to lay back nearly flat, with foldaway footrests available to enhance their comfort.

(Kia looks to stand out with new Forte. For more, Click Here.)

The high-tech interior would go an extra step, allowing passengers to actually monitor their health with “Smart Sensors built into the seats. Just back from a long flight? A Light-Emitted Rejuvenation system would use a wing-shaped LED screen mounted beneath Telluride’s big sunroof to help treat your desynchronosis – or jetlag. 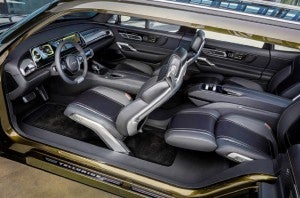 The Telluride’s technology also includes its Swipe Command system. That’s a thin, touch-sensitive band mounted into the rear console. Much like a smartphone, it allows a passenger to quickly scroll scroll through the available media and then play it on the concept vehicle’s 7-speaker Harman Kardon premium audio system.

The high-tech focus extends to the engine compartment, the Kia Telluride powered by a plug-in hybrid system pairing a 3.5-liter gasoline engine with a single electric motor. The transverse-mounted system makes a combined 400 horsepower – 270 from the V-6, 130 more from the electric motor – and sends that power to all four wheels.

To fire up that drivetrain, forget keys and keyfobs. The Kia Telluride relies on a fingerprint-activated touch start button, much like the home button on an iPhone.

Kia says it is looking closely at all of the various technologies incorporated into the Telluride concept. The maker has also laid out a timetable for adding autonomous features to its products.

(Click Here for a look at the latest Kia Sportage.)

But with or without the Swipe Command and fingerprint reader, don’t be surprised to see Telluride reappear in the not-too-distant future as part of the Korean carmaker’s SUV line-up.