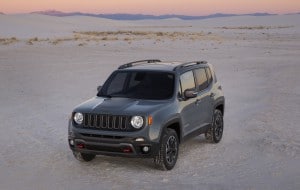 Jeep posted a 25% sales increase in 2015, led by the success of the Renegade in the EMEA markets.

However, Jeep’s biggest sales gains came beyond North America as overall sales of Jeeps topped 1.1 million units, according to figures released by Fiat Chrysler Automobiles N.V. During 2015, the Jeep brand set all-time sales record in Europe, Middle East, Africa with 117,620 units sold and volumes were up by 55.7% in comparison with 2014.

Since 2009, Jeep sales have tripled in EMEA, with the region currently ranking second in terms of volume after North America, with a share of 10% of the brand’s global sales, compared with 7% in 2014, FCA reported.

In Europe, Jeep was the fastest-growing automotive brand recording a 132.2% increase in a year that also saw the best performance ever in terms of volume for the European market with 88,200 registrations and a 113% increase compared with 2014.

Several EMEA countries recorded their best sales year ever in 2015. In Italy, the top-selling country in the region, Jeep set its all-time record with sales almost tripled in comparison with 2014 and with Jeep being the fastest-growing automotive brand in the country.

Recording a total of 14,995 new registrations, Jeep achieved its best annual result also in Germany with sales up by almost 42.6 % versus 2014.

The UK sold more Jeep vehicles in one year than in the four years of 2011 to 2014 combined, recording a growth of 176.1%, compared with 2014 sales. Last year was the UK’s best year ever, with Jeep being the fastest-growing car brand in the market last year.

In France, Jeep also recorded its best ever full-year sales performance with an increase of 208.5% (8,585 units) versus 2014, mainly driven by Renegade.

Also, in Spain, Jeep closed 2015 as the fastest-growing brand in the automotive sector (205.4%) and set its all-time annual sales record. During the 12 months of 2015, more Jeep vehicles were sold in the Spanish market than in the previous three years (2012-2014) combined.

(Reinventing the minivan: Chrysler betting big on the new Pacifica minivan. Click Here for the story.)

At product level, Renegade led the brand’s EMEA results last year with more than 54,800 units sold and accounting for 49.8% of total Jeep sales in the region. The company’s built more than 200,000 units to date at the renewed FCA Melfi Plant in Basilicata.

With 28,159 units sold, the Detroit-built flagship Grand Cherokee made an important contribution to the brand’s commercial success, accounting for almost 24% of total 2015 sales and being the second best-selling Jeep model in the region. Jeep Cherokee significantly increased its performance versus 2014, while the iconic Wrangler confirmed its steady performance with 14,109 units sold.

Mike Manley, the executive in charge of the Jeep, brand continues to gain momentum across the board. Jeep finally opened its new plant in China last fall in an effort to reach Sergio Marchionne’s target of 2 million Jeep sales around the world by the end of 2018. FCA also opened a new plant in Brazil last year but sales were slowed by recession.

Meanwhile, Jeep brand sales increased 42% in December as it posted the brand’s best monthly U.S. sales ever. The Jeep brand has set a sales record in every month dating back to November 2013. Five Jeep models set sales records in December.

The Cherokee, Compass and Renegade each logged their best monthly sales ever, while the Wrangler and Patriot tallied their best December sales ever. The Compass’ 78% increase was the largest year-over-year percentage gain of any FCA US vehicle in the month. Sales of the flagship Jeep Grand Cherokee were up 22% for its best December sales in 10 years. Jeep Renegade sales were up 22% month-over-month for its best sales month since launch in March.