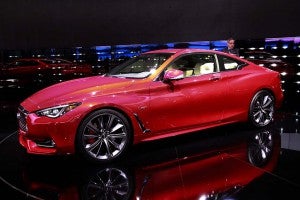 Infiniti continued its renaissance in Detroit today as it unveiled its new Q60 sports coupe at the 2016 North American International Auto Show.

The new coupe is part of the move at Infiniti to offer buyers – younger buyers – more performance-oriented vehicles with compelling exterior designs to match the new power under the hood.

The Q60 is supposed to look like a cat ready to pounce and with aggressive lines and staunch proportions, it looks the part. More importantly, Infiniti put a powerplant under the hood to make sure it acts the part as well. 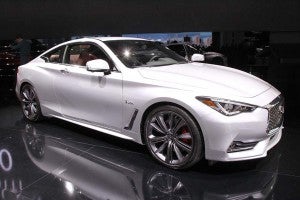 The high performance 3.0-liter V6 twin-turbo engine gets the “VR” powertrain family designation. Depending upon the configuration, it will develop 300 or 400 horsepower. That horsepower is channeled through the Q60’s rear wheels for an emphatic dynamic response.

Buyers can get a more responsive vehicle with Infiniti’s new optional Dynamic Digital Suspension, which has been engineered to provide crisp handling responses and superior ride comfort.

Infiniti’s available second-generation Direct Adaptive Steering brings improved levels of steering feel and feedback to the Q60, and the Drive Mode Selector gives drivers the option to personalize the steering’s precise responses to suit their preferences.

(Click Here for details about the new Lexus LC 500.)

“The Infiniti Q60 conveys a powerful elegance through its daring design, next-generation ride and handling technologies, and powertrains offering up to 400 horsepower,” said Roland Krueger, president, Infiniti Motor Company Ltd. “The Q60 will attract new customers to the Infiniti brand and affirm our position in the sports coupe segment.”

The world premiere of the new Q60 sports coupe comes at a time of rapid growth for Infiniti, released in the midst of an intense global product offensive. Infiniti sold a record 215,250 new vehicles in 2015, a year-over-year increase of 16%.

(To see how Nissan is pushing boundaries with the Titan Warrior concept, Click Here.)

Alongside the Q60 at the 2016 NAIAS, Infiniti has revealed upgraded versions of the Q50 sports sedan and the QX60 crossover. The launch of these three models highlights Infiniti’s commitment to expand and refresh its product portfolio.