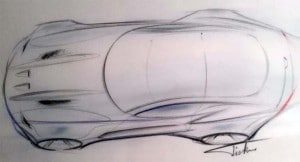 A sketch of the Fisker Force 1.

The suit, filed in federal court in Central California, centers around the Force 1 sports car Fisker is planning to reveal next week at the 2016 North American International Auto Show. It claims that Aston has taken steps to block the debut of the car or make changes before its launch.

“This is a classic case of David vs. Goliath,” said Fisker. “Aston Martin is trying to intimidate me to prop up their own flailing company and to mask their financial and product deficiencies.  I refuse to be intimidated and that is the reason for today’s filing.”

This is actually the latest in a running grudge match between Fisker and Aston. Early last year, the British maker blocked the designer from showing off another sports car he had designed before its scheduled debut at the annual Amelia Island Concours d’Elegance. There was concern, according to Aston’s lawsuit, that Fisker had lifted some of the British company’s intellectual property, such as its grille design and winged logo. 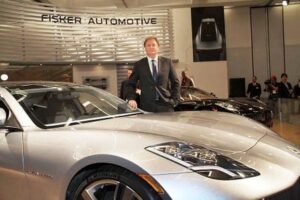 Henrik Fisker spent a number of years working for Aston and was widely hailed for his work on such products as the V8 Vantage and DB9 sports cars. He later left the company prior to Aston’s spin-off by parent Ford Motor Co. He is perhaps best known to the wider public as the founder of the eponymous Fisker Automotive. The California-based firm tried to market a plug-in hybrid sports car before going bankrupt in 2013.

Henrik Fisker has been staging a comeback over the last 18 months. He has designed several modified versions of the latest Ford Mustang, and was hoping to produce a limited number of Force 1 supercars following its debut in Detroit next week.

But the Fisker suit claims Aston took steps to block the unveiling based on the release of a teaser sketch to the media last month. A statement from Fisker’s public relations agency claims that, “Aston Martin’s letter admits, “We do not know what the final version of Fisker’s Force 1 will look like.”

Asked about the legal action, Aston said it “was unable to comment on pending litigation.”

Fisker has hired Jonathan A. Michaels of MLG Automotive Law, an attorney specializing in automobile law, to handle the suit.

“We believe that in an effort to protect itself from further market erosion, Aston Martin and their three executives who run the company, conspired and devised a scheme to stomp out Henrik Fisker’s competitive presence in the luxury sports car industry, “ explained Michaels.  “Because of the threats they laid out in their letter we opted to play offense in regards to Aston Martin’s transparent and nefarious motives.”

At this point, Fisker plans to move ahead with the Detroit debut of the Force 1.