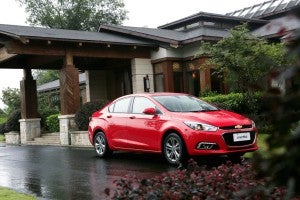 A Chevy Cruze in China, which has cemented its role as GM's largest global market.

While the increase was a modest 0.2%, General Motors nonetheless managed to eke out another global sales record in 2015, its third year in a row.

The Detroit-based maker today reported total sales came to 9.84 million, putting it just behind German rival Volkswagen AG. Toyota, which hasn’t yet reported its figures for 2015, is expected to retain the industry’s global sales crown, however.

“GM continued to grow in 2015 as our focus on the customer and successful new vehicle launches more than offset the challenging conditions in South America and the curtailment of our presence in certain markets such as Russia,” GM President Dan Ammann said in a statement.

The increase came even as the Detroit maker paired back its traditional reliance on daily rental companies and other, less profitable fleet sales. That led to a 6.9% decline for the maker’s big Chevrolet brand, which accounts for 45% of GM’s total global volume. But GM stressed that Chevy’s retail business for the year rose 5%, to 2.1 million worldwide.

The Buick brand, which some thought GM would abandon during its 2009 bankruptcy – along with brands Pontiac, Saturn, Saab and Hummer – reported a third consecutive record of its own, with sales ending the year with a 25.4% burst, and up 8.7% for all of 2015. 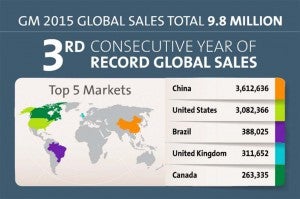 Buick has become heavily dependent upon the Chinese market where it is one of the country’s most popular marques, but it has also begun rebuilding its business in the U.S. That has come with a rapid expansion of its American product line-up. That includes the all-new Buick Cascada convertible and the upcoming launch of the Envision, a small, Chinese-made crossover-utility vehicle.

Envision will become only the second car sold in the U.S. imported from China, following the debut of a stretched version of the Volvo S60, dubbed the Inscription. But GM also confirmed this week it will import a small number of Chinese-made Cadillac CT6 plug-in hybrids.

(Click Here For more on GM’s plans to import vehicles from China.)

Despite a stuttering economy and an unexpected slowdown in its automotive market, China cemented its position as GM’s largest global market last year. Sales through its various joint ventures there came to 2,612,636 last year, compared to 3,082,366 in the States. Sales in China rose 5.2%, setting another record.

Brazil was a distant third for GM, with sales of 388,025 cars, trucks and crossovers, followed by the U.K. and then Canada.

GM was the world’s largest automaker for three-quarters of a century before falling behind Toyota as it slid towards its 2009 bankruptcy. It briefly regained the lead in 2011 as the Japanese auto industry was slammed by the powerful earthquake and tsunami that hit Northern Japan.

Toyota hasn’t reported its numbers yet for 2015 but the maker has said sales will be down slightly for the year, albeit still topping the 10 million mark.

Volkswagen’s volume was also down by 2%, to 9.93 million, but that appears to leave it in the number two spot. VW briefly surged to industry sales leadership during the first half of 2015. It has suffered a sharp drop in demand in recent months, however, in the wake of its diesel emissions cheating scandal.

VW is struggling to regain its footing but could be challenged for second this year, especially as it can’t currently sell its diesel models in the U.S. until it comes up with a fix for the problem. The EPA rejected one proposed repair plan last week.

(For the latest on VW’s diesel woes, Click Here.)