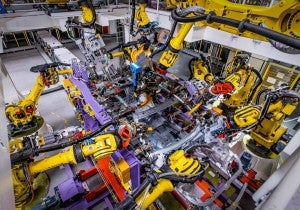 General Motors opened its new plant in Shanghai that will build the Cadillac CT6 for China.

General Motors opened a new Cadillac plant at its SAIC-GM joint venture in Shanghai to build the CT6 luxury sedan for the Chinese market even as the growth of China’s economy limps along at its slowest pace in 25 years.

“This is another major milestone for Cadillac in its second-largest market,” said GM Executive Vice President and President of GM China Matt Tsien. “Local production will enable us to satisfy growing demand for luxury vehicles through the introduction of more Cadillac models built in and for China.”

Linda Lim, a professor at the University of Michigan’s Ross School of Business, noted that China’s economy is undergoing a transition.

“The latest data out of China confirms what everyone already knows, in other words, GDP growth slowed in 2015,” she said. “This itself is not a problem if it reflects the impact of long-term structural reforms that the government has long said it wants, for example, SOE reform which would reduce output and employment.

GM will import its new Cadillac CT6 plug-in electric hybrid from the company's plant in Shanghai.

“Perhaps both China and the world need to accept and get used to its ‘new normal’ of slower—but still positive and higher-than-world averages—GDP growth going forward.”

For GM and its principal Chinese partner, SAIC, the 477,000-square-meter Cadillac plant represents investment of $1.22 billion. It has a planned annual capacity of 160,000 units. The plant includes a body shop, a paint shop, a general assembly shop and a high-speed test track.

The plant is also fully equipped with advanced manufacturing technologies throughout its three production shops. The body shop is the first in China capable of manufacturing all-aluminum bodies. It consists of two fully automated production lines – one steel and the other aluminum – with 386 robots.

The shop has also adopted GM’s patented mixed-material welding technologies. They include resistance spot welding of aluminum (a global first on the CT6), laser brazing of aluminum (a Chinese industry first) and extensive use of the industry-leading cold-body connection process that uses self-tapping screws and self-piercing rivets.

(Click Here for details about GM importing a second car from China to the U.S.)

The general assembly area is highly flexible and supports the production of up to seven models simultaneously. The digital assembly facility incorporates the industry-leading Internet of Things system, which can monitor torque information for every key fastening point.

The Cadillac plant serves as a “green” benchmark for vehicle manufacturing globally.

The paint shop is the only facility of its kind in China without a concrete chimney. The environmentally friendly spray booth exhaust treatment system and dry venturi scrubbers make the shop nearly 300% cleaner than conventional paint shops, with significantly reduced volatile organic compound emissions and power consumption.

The Cadillac CT6 will be officially introduced in China Jan. 27.