General Motors Quietly Stops Production of Cruze Diesel in US

Unclear if move is temporary or permanent. 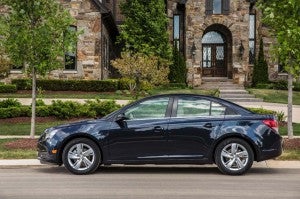 GM has quietly stopped producing the Chevy Cruze diesel as it reassesses the diesel market in the U.S.

Steven Majoros, marketing director for cars and crossovers for General Motors Chevrolet Division, said GM halted production of the diesel-powered Chevrolet Cruze at its assembly complex in Lordstown, Ohio, this past October when it switched over the new version of the Cruze.

“We have plans to offer a diesel option again. But we haven’t said when,” said Majoros, adding the final decision could rest on the impact of the fallout of Volkswagen scandal on regulators and consumers.

Other carmakers are also quietly getting out of the diesel market, at least temporarily.

Ola Källenius, the Board of Management member responsible for Mercedes-Benz Cars Marketing & Sales, indicated that Mercedes was prepared to de-emphaisze the sale of diesel-powered vehicles in the U.S. even though it has developed a newly designed diesel engine for the 2017 Mercedes-Benz E-Class that will meet the tougher emission standards that are now looming.

While diesel-powered passenger cars are common in Europe where diesel fuel is cheaper than gasoline demand for diesel-powered cars in the U.S. is significantly smaller, accounting for less than 5% of the brand’s total sales.

The volume is unlikely to grow in the wake of scandal, he added. “We have a clientele for diesel, but it’s a niche market in the U.S.,” Kallenius said.

Volkswagen and Audi executives made a point of using their press conferences during the Detroit Auto Show to apologize to their customers about diesel scandal. “The diesel exhaust issue has been unfortunate situation that we are 100 percent behind getting this issue resolved,” said Rupert Stadler, Chairman of the Board of Management of Audi AG.

Herbert Diess, head of the Volkswagen brand, also said VW was “sorry” that the scandal had hurt VW customers in the United States. “We’ve let down our dealers and customers,” he said. “We are truly sorry about that. We are committed to making things right,” Diess said.