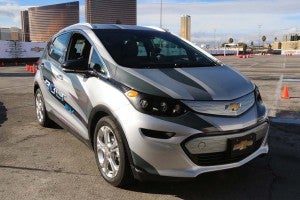 TheDetroitBureau.com got an early test drive in a preproduction version of Chevy's 2017 Bolt EV.

An unusual winter rainstorm has finally moved out and the sun is once again shining over Sin City, drying out the temporary test track that Chevrolet has dubbed Electric Avenue.

The little car launches out of the starting gate with unexpected speed – and in near silence, only the crunch of gravel under its tires reaching the surprisingly roomy cabin. For those who think of electric vehicles as sluggish, cramped and boring, a quick spin in the new Chevrolet Bolt could come as a surprising revelation.

The 2017 battery-electric vehicle is likely to shatter a lot of preconceived notions. Unlike most of the BEVs now on the market, the Bolt will offer significant range, about 200 miles per charge, or more than double what most current electric vehicles can deliver. But unlike that other long-range battery-car, the high-priced Tesla Model S, the Bolt will be targeting the mainstream market, coming in at less than $30,000 once federal tax credits are factored in. 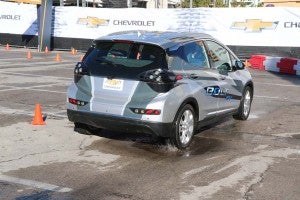 Resembling a Chevy Sonic on the outside, the new Bolt offers room like a Malibu on the inside.

One of the reasons is the “fun-to-drive factor,” says Fletcher. Unlike so many current electric vehicles, our admittedly brief run in the Bolt quickly reveals it to be quick and surprisingly nimble. No, it’s not a Chevy Camaro, but it’s quick off the line and handles the tight and twisty track the maker has laid out with unexpected aplomb.

Ironically, the big battery pack actually works to the car’s advantage on the track. Mounted underneath the passenger compartment, rather than eating up trunk space like many BEVs, it translates into a low center of gravity.

The Bolt was originally introduced in concept form at the 2015 North American International Auto Show, and the production version is being unveiled this afternoon at the 2016 Consumer Electronics Show by GM Chairman and CEO Mary Barra. Chevrolet officials are holding back on releasing specific technical details until next week, when they will show the battery car at the 2016 NAIAS.

But TheDetroitBureau.com has been able to ascertain some critical details that give a sense of what GM engineers have come up with.

The 2017 Chevrolet Bolt will utilize a lithium-ion battery of approximately 60 kilowatt-hours. In an interview last month, meanwhile, GM product development chief Mark Reuss told TDB that the company will benefit from a sharp reduction in battery costs. The individual cells will come in at around $150 per kWh, or barely 15% of what similar batteries were going for at the beginning of the decade. 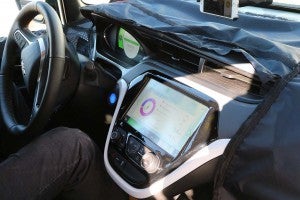 The Bolt offers the driver a slew of information and controls on a large touchscreen display.

That would translate into a savings of around $50,000 in factory costs per vehicle, permitting GM to offer the market’s first long-range, mainstream battery-electric vehicle.

That pack, incidentally, weighs in at around 700 pounds. It will drive a single electric motor expected to produce something on the order of 200 horsepower and more than 300 pound-feet of torque.

“People like that kick-in-the-pants feel when you step on the accelerator,” says Fletcher.

They’re also likely to be impressed by the interior. No, it’s not a luxurious Model S, but our prototype hatchback is reasonably well-appointed and surprisingly roomy. Alan Batey, head of Global Chevrolet, notes that while the exterior footprint is that of a subcompact B-segment vehicle – a la the Chevy Sonic – the interior is near equal to a D-segment model, a Malibu or better. 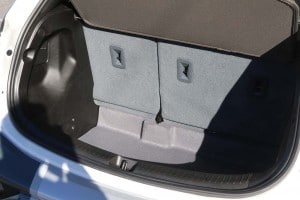 The cargo compartment is surprisingly large, and Chevy will offer a flat load floor option that can create a hidden storage bin.

The cargo compartment is surprisingly large, meanwhile, and Chevy will offer a flat load floor option that can create a hidden storage bin.

The 2017 Chevy Bolt will be loaded with high-tech features, including an optional camera-based rearview mirror that is shared with the decidedly more expensive new Cadillac CT5 sedan.

There are plenty of connectivity features, including OnStar, a smartphone app link, Apple CarPlay, Android Auto – and a 10.2-inch, high-res touchscreen that can be as easily reconfigured as a computer screen.

“We’ve put everything we have in terms of technology into this vehicle,” boasts Batey.

That’s all meant to increase the battery-car’s appeal to sought-after Millennials. But there’s another target audience: the new mobility market. Earlier in the week, GM announced it was investing $500 million in ride-sharing service Lyft. According to Batey, GM wants to see large numbers of Chevy Bolts put into the Lyft fleet.

“We intend to make this work in the mobility sector, so it’s really good for ride-sharing,” he explains.

In a sense, that’s a little sad. Riding in the Bolt is a pleasant experience, but driving it is where the real fun comes in. We’ll be looking forward to spending more time in the final version of the new battery-electric vehicle sometime in the months to come.