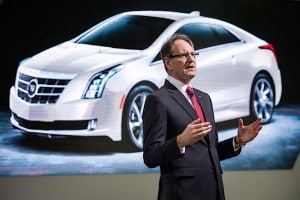 As part of its ongoing push to rebuild its image and challenge the best of its import luxury competitors, Cadillac will launch an all-new twin-turbo V-8 engine in models like the new CT6 sedan and the even more upscale CT8 to follow later in the decade.

The launch of the new 4.2-liter powerplant is still “a few years off,” Cadillac President Johan de Nysschen told TheDetroitBureau.com during an exclusive interview, and final details have yet to be resolved, including the transmission it will be paired with and whether it will be packaged in an all-wheel-drive configuration.

The new V-8 is being “developed more for refinement, sophistication and torque, rather than for pure horsepower,” explained de Nysschen during an interview in Los Angeles where he is attending the first media drive of the 2017 Cadillac CT6.

That sedan is taking aim at such German fixtures as the Mercedes-Benz S-Class and BMW 7-Series, and underscores the upward push that Cadillac is making. Since joining the once-dominant brand in mid-2014, de Nysschen has accelerated that drive, pushing parent General Motors to approve funding for a variety of projects, including both new vehicles and powertrains. 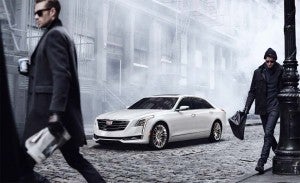 The new Cadillac CT6 will likely get the new twin-turbo V-8 by he middle of its lifecycle.

He recently confirmed that three new SUVs are under development, on top of the replacement for the old Cadillac SRX that will reach showrooms later this year.

While Cadillac – like key competitors – has traditionally relied on big V-8s in its top-line models, it has signaled a shift to more high-tech, lower-displacement alternatives. The CT6, for example, is debuting with a twin-turbo V-6 under its hood, albeit one delivering V-8 performance, with 404 horsepower and 400 foot-pounds of torque. A plug-in hybrid, due to debut a year from now, will make similar numbers.

European and Japanese luxury makers have also been downsizing and going with alternative technologies. Volvo has adopted an all-four-cylinder strategy. Mercedes is planning to roll out 10 plug-in hybrids by 2017. And Audi will launch a pure battery-electric SUV by 2018.

But more traditional engines aren’t vanishing entirely and, if anything, remain an even more element in setting the upper boundaries for big luxury players.

Mercedes-Benz and BMW each offer both eights and V-12s in their most premium models, such as the Mercedes S63 and S65 sedans and coupes.

“We don’t do a V-12,” said de Nysschen, adding that it would “not be economically feasible.” 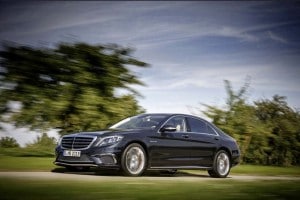 But Cadillac still sees a V-8 as critical to positioning itself at the upper level of luxury, albeit with a more advanced, twin-turbo version. Though no specific performance numbers are available yet, several sources suggested Caddy engineers are aiming for a horsepower figure that could nudge into the 600 range, in line with similar German offerings.

Though Cadillac does have V-8s available now – including ones used for both the big Escalade SUV and the high-performance CTS-V model, the engine under development will be completely new and developed especially for the “sophisticated” demands of the luxury segment’s most exclusive buyers.

It will “tuned,” for a smoother ride, de Nysschen stressed, rather than going for raw power. “It’s not a boy racer type engine,” he added, suggesting that there are “absolutely no plans” for the V-8 version of the CT6 or CT8 model to carry a V-Series badge. That designation is currently used on the most powerful versions of the smaller ATS and CTS models.

As for timing, the South African-born executive noted “development work just started, so it’s a few years off.” But de Nysschen expects it to reach production within the lifecycle of the new Cadillac CT6.

Going forward, the new V-8 will likely show up elsewhere in the Cadillac line-up. “We want to utilize such an engine in as many applications as possible,” the executive said. And considering the number of new Caddy models coming under de Nysschen’s grand product plan, the maker should have plenty of places to put the big powerplant in the years ahead.