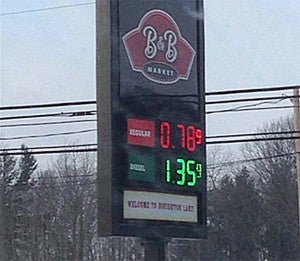 If you think $2 a gallon gas is a bargain, imagine what the reaction was when a pair of service stations in Northern Michigan got into an old-fashioned price war this week.

The Beacon & Bridge Market, in the town of Houghton Lake, was first to fire a shot, dropping the price of regular unleaded to just 78 cents a gallon. A neighboring station quickly responded and, for a brief while, motorists were able to fill up for as little as 47 cents a gallon, according to a report from a TV station in the nearby town of Clio.

According to GasBuddy.com, the two stations are now back up a bit, just slightly over $1.50 a gallon. Michigan, as a whole, is now averaging just under $1.70, according to tracking site GasBuddy.com, and the U.S., as a whole is down to $1.873 as of the afternoon of January 19th.

And falling. That’s a penny cheaper than it was just that morning, and nearly a dime less than the week before, GasBuddy reports. Even in California, where motorists pay the highest price, at $2.759, the numbers have tumbled sharply in recent weeks.

Gas prices have averaged just slightly over $2.00 so far this year — $2.002, to be precise – and will likely drop below that milestone rather quickly if the current trend holds. The lowest national average ever seen on January 19th, incidentally, came on 1/19/09, when the figure fell to $1.828 – and when you factor in inflation, that’s actually $2.02 today. 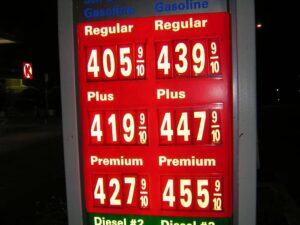 It wasn't all that long ago.

But will the trend hold? Long-term, it’s anyone’s guess. All sorts of factors could nudge the price of oil back up, but for the moment, it’s as if someone pulled the drain plug on prices. On Tuesday, a barrel of benchmark Brent crude dipped below $29.

“Now that Iran has been given the green light to come in from the cold, it is difficult to see where the next rebound in oil prices is likely to come from, raising concerns about further bankruptcy losses across the sector, if as predicted prices fall further towards $20 a barrel,” Michael Hewson, an analyst with CMC Markets, said last week.

Long under strict sanction, Iran was able to sell to only a handful of countries, notably including China. With those restrictions lifted as a result of the new limits on its nuclear program, Iran has said it immediately aims to boost production by 500,000 barrels a day. Some analysts believe it might soon be up by as much as 2 million barrels, though others caution that Iran’s creaking oil infrastructure must first go through some major repairs and upgrades.

(Newly opened Iran not an immediate windfall for U.S. automakers. Click Here for the story.)

Even a modest increase would flow into a worldwide glut, especially if Saudi Arabia, the de facto ruler of OPEC, maintain its current production base. But will it?

The Saudis are believed to be pumping as fast as they can in order to maintain their premier position. It also helps weaken some of their political foes, including Russia. And the current oil glut, and concurrent price slump, is making it harder for American producers. The U.S. is pumping at record levels, but the price of bringing it out of the ground is much higher than in the Mideast, so at the current figures, most drillers are operating deep in the red, some already shutting their pumps down.

It’s likely only a major pullback that would lead to a recovery in the oil trading market, analysts explain. But compounding the downward pressure is the economic slump in China. And even in markets like the U.S. and Europe, where economies are recovering, efficiency efforts have driven down demand for oil.

There are plenty of scenarios that could throw the oil market into turmoil, but for now, traders and producers are simply hoping to put the brakes on the slide. They know higher prices are something they’ll likely have to wait for. And, in the meantime, motorists have reason to celebrate, even if they aren’t likely to see 47-cent gas at their local pumps.

(Forget Millennials, a growing number of Boomers are also giving up their driver’s licenses. Click Here for the story.)