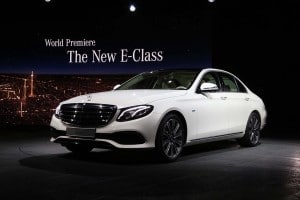 Mercedes-Benz unveiled its new E-Class in Detroit on the evening before the start of the North American International Auto Show.

There was a time when you measured luxury by the pound and inch, and perhaps by the amount of leather and wood in a car’s interior. Not anymore.

These days, technology has become more and more of a deciding factor, and by that measure, it’s hard to beat the 2017 Mercedes-Benz E-Class.

Making its formal debut during a Sunday night reception ahead of the North American International Auto Show in Detroit, the midsize Mercedes goes a good step beyond the maker’s already tech-laden flagship, the S-Class, adding an array of new infotainment and safety features and introducing some of the most advanced, semi-autonomous features yet on the road.

Mercedes has been rolling out a series of self-driving concept vehicles over the last several years, and while the 2017 E-Class doesn’t quite get there yet, its Drive Pilot is heading in that direction. It allows not only the ability to drive hands-free for short periods on a limited-access highway, but doesn’t need to have visible lane markings at speeds up to 80 mph – a notable limit of the AutoPilot system recently launched by luxury rival Tesla Motors. 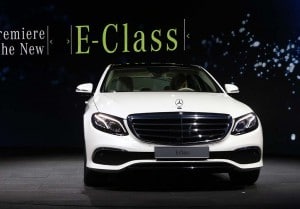 The new Mercedes-Benz E-Class is laden with new technology: the measuring stick for luxury vehicles.

The updated Pre-Safe system now can assist a motorist not only stop for a pedestrian or oncoming car but even steer around an obstacle, if need be, to avoid a crash. And it can sense a potential side impact, as well as a possible forward crash.

The new E-Class is one of the first vehicles equipped with Connected Car technology designed to let it talk to other vehicles and a highway infrastructure – though that’s a largely academic achievement for now. It will likely be late in the decade before many other vehicles are similarly equipped, and even longer before there’s a significant roadside infrastructure.

The cockpit of the new sedan features massive, side-by-side LCD screens covering two-thirds of the instrument panel and making it easy for the driver to check on everything from infotainment to navigation guidance, as well as the typical gauge cluster readouts. 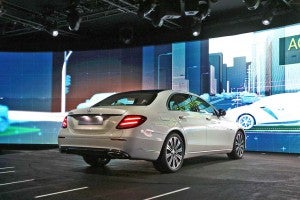 The new sedan retains the basic shape of the outgoing E-Class.

“There are no Ph.Ds for intelligent cars,” joked Thomas Weber, Daimler’s board member in charge of research and development. Perhaps, but the new E-Class will clearly get a gold star and go to the head of its class.

The infotainment system doesn’t have the gesture control technology found in the new BMW 7-Series, but it has a series of redundant controls, including the COMAND knob, a touch pad, and a new, smartphone-like Touch Control system built into the steering wheel.

Mercedes has built plenty of technology into the rest of the vehicle. That includes the new multi-beam LED headlights that are smart enough to aim around oncoming vehicles.

There are the expected E-Class variants, of course, from the diesel to the Mercedes-AMG E63. But the German maker is also adding the new E 350e, the first plug-in hybrid version of the midsize sedan. Its lithium-ion battery pack will deliver up to about 20 miles per charge and is expected to get about 60 miles per gallon – in the European test cycle, though that will likely be a bit less in the U.S. EPA rating. 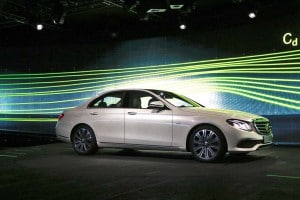 Mileage is expected to be up on all the new Mercedes E-Class variants, in part due to its improved aerodynamics.

(Click Here for details about the leaked pictures of the Mercedes E-Class.)

“It has the performance of a sports car with the fuel efficiency of a compact car,” said R&D chief Weber.

Mileage is expected to be up on all the new Mercedes E-Class variants, in part due to its improved aerodynamics. The sedan has, on average, also shed about 150 pounds, noted Weber.

Visually, the new sedan retains the basic shape of the outgoing E-Class, but there are some key details that will signal it’s the 2017 model, including those new LED headlights, and a major re-do of the grille to pick up on the design cues of recent models like the Mercedes S- and C-Class lines. The overall look is a bit more coupe-like, again in line with what we’ve seen done with other recent sedans. And there’s now a subtle rear spoiler popping off the deck lid.

(Mercedes shows that it’s what’s inside that counts. Click Here for the story.)

Pricing won’t be released for the various 2017 Mercedes-Benz E-Class models until closer to its autumn launch in the U.S.