New model looks to do 0 to 60 in less than four seconds. 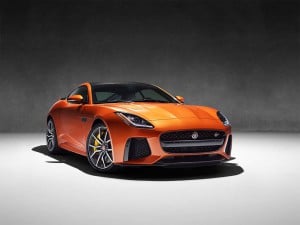 The new Jaguar F-Type SVR is expected to make its debut at the Geneva Motor Show.

Jaguar is set to crack the 200 mph barrier with the debut of the new F-Type SVR at the upcoming Geneva Motor Show.

The British maker has acknowledged the upcoming debut of the sports car’s latest iteration. What it’s not quite ready to confirm is that the Jaguar F-Type SVR will match the 0 to 60 times of the limited-edition Project 7 hypercar. That would mean something on the order of 3.6 seconds, according to reports out of the UK.

“The new F-Type SVR is the first series production Jaguar car to be developed by Special Vehicle Operations and benefits from everything we know about precision engineering, performance and design,” said John Edwards, managing director, Jaguar Land Rover Special Operations.

To keep everyone happy – at least if they’ve got deep enough pockets – Jaguar says it will offer the F-Type SVR in both coupe and convertible body styles when the new model goes on sale this coming summer.

Celebrated by many as the reincarnation of the legendary Jaguar E-Type, the British maker has been steadily amping up the performance of the F-Type since it first reached showrooms nearly three years ago. It debuted in ragtop trim, the stiffer-bodied coupe following a year later. 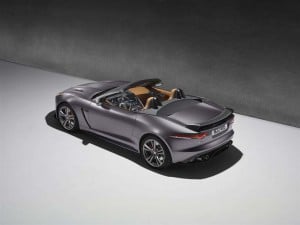 The Jaguar F-Type SVR convertible is capable of a top speed of 200 mph and is expected to do 0 to 60 in less than four seconds.

(Jaguar not quite ready to plug in. For more, Click Here.)

According to a leaked brochure, the Jaguar F-Type SVR will share the same 5.0-liter V-8 used in the Project 7. It delivered 567 horsepower – at least in European trim – about 25 more than the F-Type R. The SVR is also expected to make around 516 pound-feet of torque.

The new SVR Coupe will make it to 200. Jaguar is hinting the convertible won’t quite peg the speedo needle, likely topping out at “just” 194 mph, according to Britain’s Auto Express.

But both models will share a new titanium exhaust system, according to Edwards, that will make an even more righteous noise than the current F-Type line-up.

Other revisions are expected to include new front air inlets, an upgraded splitter up front and rear diffuser, as well as more vents to feed additional cooling air through the engine compartment. There’s also a massive new rear wing that stretches from corner to corner to help keep the rear wheels planted firmly onto the pavement.

(Click Here for details about TDB’s first drive in the new Cadillac CT6.)

The wheels are spread wider and there are bigger tires wrapped around new carbon-ceramic brakes.

Along with the aerodynamic enhancements, Jaguar apparently has also taken steps to make the F-Type “lighter (as well as) faster and more powerful.

Edwards is calling the SVR an “all-weather supercar.”

Photos from the brochure also show some interior updated, including new, quilted leather seats and plenty of carbon-fiber trim, as well as a revised steering wheel and aluminum shifter paddles.

(To see more about the debut – on the track – of the new Ford GT, Click Here.)