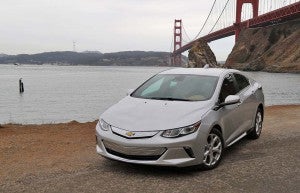 The new Chevy Volt is one of several new EVs that are helping to reduce emissions from vehicles.

Even though the price of gasoline has dropped precipitously, slowing the move towards more efficient vehicles, as of October, there were about 375,000 plug-in electric vehicles (EVs) on America’s roads, according to data collected by the Natural Resources Defense Council.

At the same time, the number of different EV models available has grown from two in 2010 to over 29 today. That is encouraging, and we’ll need to continue to expand electric vehicle availability and adoption to meet our long-range climate targets, NRDC latest report on electric vehicle adoption noted.

The NRDC has long favored using electric and earlier this year sponsored joint research with the Electric Power Research Institute that suggested fueling transportation through electricity instead of oil could be a huge lever for reducing carbon pollution.

The study found that by charging vehicles and off-road equipment with clean energy like wind and solar, we could reduce carbon pollution by 550 million metric tons annually in 2050 – equivalent to the emissions from 100 million of today’s passenger cars. At the same time, wider use of EVs could reduce other air pollutants, such as ozone and particulate matter that threaten our environment and health.

The NRDC also noted that governments around the world are recognizing the need to shift to EVs with no tailpipe emissions. During the recent Paris climate talks, leaders from 13 jurisdictions from North America and Europe announced an International Zero-Emission Vehicle (ZEV) Alliance and set a goal “to make all passenger vehicle sales in our jurisdictions ZEVs as fast as possible, and no later than 2050,” the report noted.

(Click Here to see how the new Paris climate accord will impact motorists.)

Landmark climate legislation passed this year directs the electric industry to propose “programs and investments to accelerate widespread transportation electrification to reduce dependence on petroleum, meet air quality standards, achieve the goals set forth in the Charge Ahead California Initiative, and reduce emissions of greenhouse gases to 40% below 1990 levels by 2030 and to 80% below 1990 levels by 2050,” the report noted.

Basically, California’s utility industry will now have to electrify cars, trucks, and buses in a manner that supports the grid and ensures more people have access to a cleaner transportation fuel that’s the cost-equivalent of dollar-a-gallon gas.

(Tokyo wants its cars to go green in time for the Olympics. Click Here for the story.)

Leaders from several Northeast region states supporting the ZEV program have announced joint efforts to focus on regional policies that will further cut transportation carbon pollution. This will undoubtedly include strengthening standards for car and truck efficiency and accelerating the use of electric vehicles.