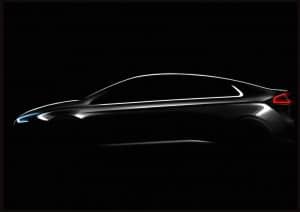 Hyundai is teasing its new multi platform Ioniq ahead of its debut in January in Korea.

Hyundai is charging up its product portfolio for 2016 with a vehicle it has never offered consumers before: an electric vehicle.

The new Ioniq will be available next year as a hybrid, plug-in hybrid or pure battery electric, which will make the South Korean automaker the first to offer buyers a choice of all three in the same body style.

The car will be shown first Korea then it will hit the show circuit for a bit with appearances at the Geneva and New York auto shows in the spring. The automaker hasn’t offered up a timetable for when it will move from show car to showroom model, only that it will happen next year.

While the teaser photo doesn’t offer a lot in terms of visual styling cues, the name at least provides some insight into the new EV, referencing the elements of its creation.

(Porsche on a mission with new battery-electric supercar. For more, Click Here.) 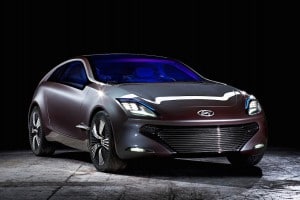 The Ioniq first made an appearance during the 2012 Geneva Motor Show.

An ion is an electrically charged atom, linking to the car’s clever combination of electrified powertrains. The second part of the name references the unique offering it brings to the Hyundai range, demonstrating the brand’s environmental commitment and willingness to maximize choice for its customers.

Finally, the Q is depicted in the car’s logo as a visual breakthrough, acknowledging the fresh new approach of this advanced, low-emission model, the maker claims.

“Hyundai Motor has a heritage of building innovative, fuel-efficient vehicles, so we are proud to advance our eco-friendly car line-up with the introduction of Ioniq,” said Woong-Chul Yang,Head of Hyundai Motor R&D Center.

“Our vision for future mobility focuses on choice, with a variety of powertrain options to suit customers’ varied lifestyles, without compromising on design or driving enjoyment. Ioniq embodies Hyundai Motor’s vision to shift the automotive paradigm and future mobility; Ioniq is the fruit of our efforts to become the leader in the global green car market.”

Based on an exclusive new platform, made specifically for the car’s multi-powertrain options, the Ioniq chassis is optimized to deliver responsive handling while remaining efficient in each of its three powertrain configurations. 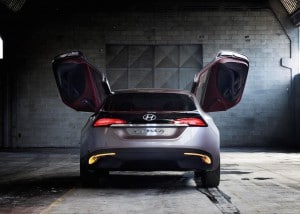 The production version of the Ioniq is unlikely to feature the gull wing doors from the 2012 concept.

As a pure EV, the car is powered by a high capacity, ultra-efficient lithium ion battery. The plug-in hybrid (PHEV) version combines a fuel-efficient energy with battery power obtained by charging the car with electricity, boosting its range while cutting its emissions.

The teaser pic isn’t the only image available … depending upon how much of the vehicle’s styling will be carried over from the 2012 concept car debuted in Geneva it showed with a slightly different spelling.

(To see more about Ford’s free-charging enticement for the C-Max Energi, Click Here.)

The “i-oniq” featured a sleek profile with an aggressive front end including angry-looking front headlamps. The raked look carried all the way back on the two-door coupe/hatch-hybrid, including on the gull wing doors.