Project for Fiat 124 Spider with controversial actor put in the “drawer.” 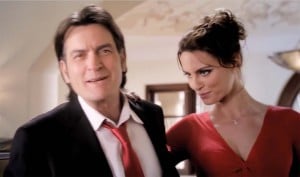 Despite generating plenty of buzz with an earlier commercial for the Italian brand, Fiat has decided to put in the “drawer” a commercial it was putting together for the new Fiat 124 Spider that featured legendary Hollywood “bad boy” Charlie Sheen.

The move comes at a time when the controversial actor is back in the news, revealing he is HIV positive. That, in turn, has prompted some former partners to threaten to bring lawsuits against Sheen for allegedly failing to advise them of his health problems.

A still-incomplete video featuring Sheen driving wildly in the new roadster was played for several dozen reporters during a sneak preview of the new Fiat 124 Spider at parent Fiat Chrysler’s headquarters in Auburn Hills, Michigan on November 3rd. But it was notably absent from the public unveiling of the 2-seater at the Los Angeles Auto Show this week, prompting speculation there may be a connection to Sheen’s latest troubles.

The 50-year-old actor previously appeared in a campaign for Fiat’s high-performance sub-brand Abarth. Titled “House Arrest,” it shows the pepped-up version of the little Fiat 500 smashing into a home where a lavish party is underway. After screeching through the mansion, Sheen steps out – wearing an ankle monitoring bracelet. 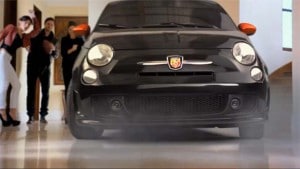 The video for the new Fiat 124 Spider echoed the same them as the older Abarth spot, showing Sheen pushing the car to extremes.

While no clear plan for the spot was announced during the background session, Bob Broderdorf, the North American director of the Fiat brand, told reporters, “If you’re going to bring this vehicle to the U.S., you’re going to have to do it with flair.”

What happened between the background session and the L.A. Auto Show debut?

“At this time, there is no plan for any FIAT creative outside of “House Arrest” that features Charlie Sheen to run on-air or online,” FCA spokeswoman Diane Martin told TheDetroitBureau.com in an e-mail.

Referring to the Italian brand’s global boss – and head of FCA marketing – Olivier Francois, she added, Olivier and his team shoot creative for many purposes – often times it is for internal presentations or auto show presentation purposes only – and is not ever intended to run as part of an on-air or online campaign.

Several ad industry insiders contacted by TheDetroitBureau.com confirmed that it is not entirely unheard of for a campaign to be scrapped or delayed, and for a variety of reasons. But they also agreed that it is rare to see a company like Fiat Chrysler go so far as it did with a major celebrity who typically commands a hefty salary for such an appearance – even if Sheen is, as spokesperson Martin suggested, “a friend of the Fiat brand.”

Those in the marketing community weren’t the only ones surprised by the decision to drop Sheen’s latest effort for Fiat. To his mind, “They don’t want to touch this,” said Joe Phillippi, an auto analyst with AutoTrends Consulting. “I think they’re embarrassed by the HIV situation – or maybe they don’t want to be embarrassed.”

The use of Sheen could be all the more uncomfortable, Phillippi suggested, because the market for the new Fiat 124 Spider will be skewed towards women.

Asked directly whether Sheen’s illness had any impact on the decision, spokeswoman Martin underlined in her e-mail that, “it will be based on what he feels is the best creative material he reviews for the launch over the course of coming year — and not by Mr. Sheen’s recent health acknowledgment.”

She went on to say that marketing chief Olivier – highly regarded for his creative work at Fiat Chrysler – — may yet go to his “drawer of creative material and (later” decide to run/air a specific video from a previous shoot online or on-air – that possibility always exists.”

(A Fiat pickup? Yep. Click Here to check it out.)