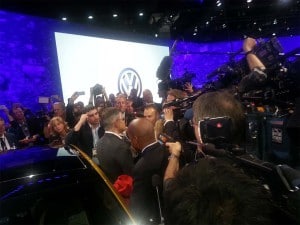 Volkswagen will have a solution “soon” for owners of diesel models tainted by an emissions rigging scandal, the company’s U.S. chief executive said during a news conference at the Los Angeles Auto Show. In the meantime, noted Michael Horn, a “goodwill package” including $1,000 in gift cards and dealership credits are about to head out to 120,000 of those consumers.

The ongoing scandal dominated the events scheduled for both Volkswagen and its upscale sibling, the Audi brand, during the L.A. show, and officials from both marques again apologized before trying to turn back to their plans for the future.

Industry analysts have suggested that Volkswagen is already feeling the impact of the diesel rigging crisis which impacts 482,000 vehicles sold in the U.S., but the Audi brand, which only has one model impacted, has largely been unscathed, Audi of America President Scott Keogh telling reporters, “We’ll have a record November and a record December.”

(Live from LA! Click Here for the latest news from the 2015 LA Auto Show.)

In Germany Volkswagen AG CEO Matthias Mueller recently said the company hopes to begin making repairs to diesels equipped with a so-called “defeat device” designed to cheat on emissions tests by January. A total of 11 million of those vehicles have been sold worldwide.

But the problem is more severe in the U.S. where the company needs to win approval from regulators for any fix to the problem which can allow VW’s TDI models to spew as much as 40 times more smog-causing oxides of nitrogen into the air than permitted when sensors onboard don’t detect the cars are being tested. 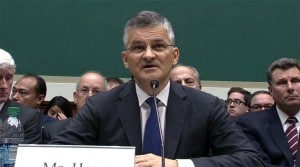 VWoA CEO Michael Horn took heat for telling a Congressional committee the cheating was the work of a "couple of software engineers."

According to a report in the New York Times, VW officials are meeting with federal regulators today and Friday to discuss a proposed fix that would bring the vehicles into compliance.

At the VW stand at the L.A. Convention Center, the carmaker tried to overcome the scandal by focusing on new models, including two niche models of the long-running Volkswagen Beetle and the latest update of the Passat sedan. But that midsize model will now be offered with only two engine options, rather than three, VW forced to halt plans to offer a 2.0-liter diesel due to the emissions issue.

Diesels have accounted for 25% of U.S. total sales for the brand – and only slightly less for its Audi subsidiary – in recent years.

But VW is pushing to get potential buyers to switch to other models, sharply increasing incentives in recent weeks, and now by offering the goodwill package for current TDI model owners. That includes both a $500 Visa debit card as well as $500 in dealership credits. The program has generated some controversy as it requires owners to go into showrooms to activate the cards.

The maker denies claims by some legal observers that acceptance the financial package will limit an owner’s ability to sue the company. So far, more than 300 lawsuits have been filed against Volkswagen, including a number of class actions. All told, they seek damages that could run into the billions of dollars.

That’s on top of the potential $18 billion in fines the Environmental Protection Agency could levy against the automaker for violating the Clean Air Act. And the U.S. Justice Department is widely expected to seek additional fines, and possible criminal charges against VW executives. Additional investigations abroad could raise the costs VW faces significantly.

The maker has so far set aside $7.3 billion to handle the scandal, a figure many analysts say will fall short, long-term. And CEO Mueller has been discussing plans to pair back some operations to cover the price tag, a move resisted by the union representatives on its management board.

For his part, Horn, VW’s top U.S. executive, said the company is “committed to making it right,” adding that the maker remains “committed to this market.”

It is hoping that the goodwill package can help it move forward. But it’s going to take some time before the conversation at future auto shows will turn back to new models like the 2016 Passat and away from the company’s cheating.