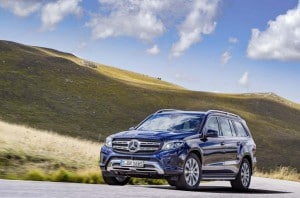 The 2017 Mercedes-Benz GLS 350d is the only diesel-powered offering in the its U.S. full-size ute line-up.

The competition at the top of the full-size luxury utility segment just got a little more heated as Mercedes-Benz continues with the makeover of its crossover portfolio with its new top-of-the-mark GLS model.

Sales of luxury vehicles have been stellar for much of 2015 and luxe utes are enjoying stunning results in recent years, as evidenced by the influx of new models across the size spectrum. However, with the new GLS series, the maker’s new seven-passenger ute is more makeover than do-over.

It retains its same boxy-yet-modern exterior design that conveys strength and power; however, the rest of the vehicle has gotten a much-needed 21st Century upgrade buyers have been clamoring for in recent years.

As to the strength and power of the new model, there’s plenty under the hood. The new GLS will be offered with four power plants in the U.S. The base model is the GLS450, with a 3.0-liter twin-turbo V6 producing 362 horsepower and 369 pound-feet of torque. With the upgrade to the GLS550 you get 455 hp and 516 lb-ft of torque. 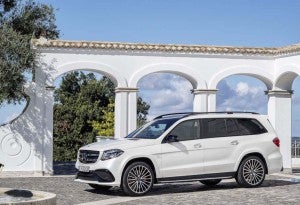 There’s a six-cylinder diesel option in the GLS350d, producing 255 hp and 455 lb-ft. And it’s not Mercedes is there isn’t an AMG version, which in this case is dubbed the Mercedes-AMG GLS63, putting out 577 horsepower and 561 lb-ft of torque. No fuel economy ratings were released for any of the aforementioned powerplants.

(Mercedes “Vision Tokyo” is a lounge on wheels. For more, Click Here.)

The standard versions come with 4Matic all-wheel drive and a nine-speed automatic transmission with additional settings. The AMG version gets a rearward-biased traction system and a seven-speed dual-clutch gearbox instead.

The standard models ride on an improved air suspension with enhanced damping; however, the GLS63 adds a Sport+ instead of Off-Road setting on the Dynamic Select controller, which makes sense since how often to AMGers take their utes off-road? That said, there’s a low-range gearbox and locking center diff available as well for those who plan to do just that.

While power and speed are great, Mercedes owners like to know they’re driving around in technological marvels and to that end, the German maker fitted the GLS with all its latest electronic systems, including Collision Prevention Assist Plus, Crosswind Assist with Attention Assist, Brake Assist BAS and Pre-Safe braking. 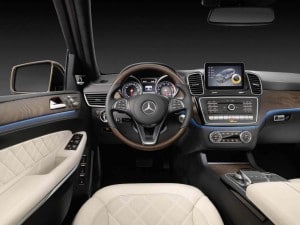 The new Mercedes GLS gets an upgraded interior that offers a variety of wood tones, new instrument panel and a new three-spoke steering wheel.

(Click Here to get more details about Mercedes bringing the A Class to the U.S.)

The vehicle’s COMAND infotainment center moves from the dashboard to a large iPad/Kindle-looking screen in the middle of the dashboard, following the lead of much of the Mercedes line-up. The move is part of an overall redesign of the instrument panel as well as a new three-spoke, multifunction steering wheel.

Looking for those special Mercedes touches? How about an air-ionization system, three-color ambient lighting and a variety of wood trim options for the interior design for the S-Class of luxury utilities?

Buyers can place an order for the 2017 Mercedes-Benz GLS in December, but vehicles won’t hit U.S. shores until late March 2016. Mercedes declined to release pricing information.