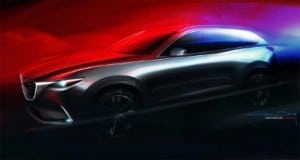 Mazda will reveal the CX-9 on November 18.

Two months after offering a first hint of what its next big crossover would look like, we’ll finally get a chance to check out the 2017 Mazda CX-9 when it makes its formal debut at the upcoming Los Angeles Auto Show.

The Japanese maker is offering up this rendering of the new three-row crossover-utility vehicle, but we can also harken back to the Mazda Koeru concept that was unveiled in September at the 2015 Frankfurt Motor Show.

“Fully incorporating the latest SKYACTIV technologies and KODO—Soul of Motion design, the all-new CX-9 is a high-end model of Mazda’s new-generation lineup,” the maker said in a statement accompanying this teaser image.

“The all-new CX-9 builds on the feeling of life imbued by KODO and moves toward a more premium design execution that befits a three-row midsize crossover SUV,” the release added.

(Mazda hints at future sports car with rotary-powered RX-Vision concept. Click Here to check it out.)

Set to debut during Mazda’s news conference at the L.A. Convention Center on November 18th, there’s little doubt that the 2017 CX-9 will pick up and run with the Kodo design language we’ve been seeing on other recent entries, such as the 2016 Mazda3. 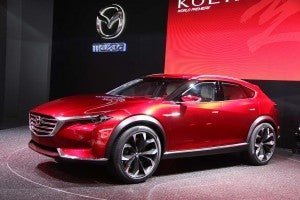 That includes the brand’s signature, five-point grille and curvaceously sculpted body. The rear window is more raked than the old CX-9, and the whole body adopts a more taut and muscular stance, as signaled with the Koeru concept.

Like most of its mainstream competitors, we expect to see the interior upgraded, as well. Pressed from above by luxury brands like Mercedes-Benz and BMW moving down-market, Mazda is feeling the need to give its products a more premium feel. That should include more soft-touch materials and a more sophisticated execution.

(Click Here for a review of the all-new Mazda Miata.)

In line with other SkyActiv models, the new CX-9 should be at least somewhat lighter than the outgoing model, Mazda engineers targeting everything from the basic body structure – which will see the use of more high-strength steel, among other things – to key components. On models like the Mazda3, the Hiroshima-based maker has even found ways to reduce the mass of its lugnuts.

Powertrain options will include Mazda’s turbocharged 2.5-liter inline-four, replacing the old six-banger in the prior-generation Mazda CX-9. And all-wheel-drive will certainly be an option.

The midsize, three-row crossover is expected to go on sale early next year as a 2017 model.

(Click Here for a closer look at the Mazda Koeru concept.)