Will Ford workers be the first group to accept new deal on first try? 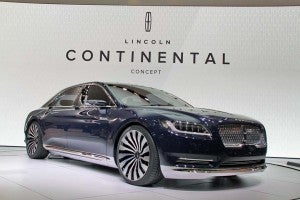 The Lincoln Continental will be built alongside the Ford Mustang and Fusion at the Flat Rock, Michigan, plant, the UAW said.

An all-new Ford Explorer is now scheduled to come down the assembly line at the company’s Chicago Assembly plant and the long-promised full-size Ford Raptor will be built at the Dearborn Truck Assembly plant under the terms of the automaker’s new contract with the United Auto Workers.

The UAW also said Ford promised to build a new mid-sized Lincoln Continental alongside the Ford Mustang and Ford Fusion at the automaker’s Flat Rock assembly plant as part of the newly agreed upon pact.

Overall, the new U.S. investments worth $9 billion are expected to create or secure 8,500 jobs for UAW members under a new tentative agreement with Ford that was overwhelmingly approved by the local union leaders on the UAW National Ford Council Monday.

All of the product changes will be made during the four-year term of the tentative contract, the UAW said.

As with the UAW new agreements with FCA and General Motors, the tentative agreement with Ford ensures that current UAW members will have a clear path to traditional wages and health-care benefits remain unchanged.

With commitments from Ford to fully utilize and invest in U.S. facilities, job security is strengthened and job growth promised, the union said. The contract also includes a moratorium on outsourcing.

The deal now goes before the rank-and-file UAW Ford members for a final vote.

“The significant new investments will strengthen job security and job growth over the long-term,” said UAW President Dennis Williams. “We worked hard to secure an agreement that provides a clear path to traditional wages for all members and substantial raises for traditional members for the first time in 10 years. Our members will have the final word, and we look forward to the conversation in the days ahead.”

Not including profit sharing, which was worth more than $30,000 in the last four years, production workers will bring home $31,013 durin the course of this contract; skilled trades will bring home $33,598. These are the first general wage increases for traditional members in 10 years.

In addition, Ford workers are also eligible for additional $1,750 in bonuses in December.

(Click Here for details about Ford’s plans to expand in the Middle East and Africa by 2020.)

The profit-sharing formula for UAW-Ford members – based on $1 per $1 million of Ford’s North American profits, already one of the best in the industry – has resulted in members taking home more than $30,000 over the past four years. This Tentative Agreement strengthens profit sharing by eliminating the cap on the amount of Ford profits subject to profit sharing, allowing UAW-Ford Members to take home an even greater share of the company’s success.

All in-progression members or second-tier workers will have traditional health care coverage. All UAW-Ford members will continue to pay no premiums, even as American workers at large employers pay an average of $1,648 in premiums for single coverage and $5,388 in premiums for family coverage.

Second-tier workers, who are no longer eligible for traditional pensions, will see an increase in the 401(k) contribution rate to 6.4% and large wage increases, Ford will be putting significantly more money into in-progression members’ 401(k) retirement savings funds.

“This Tentative Agreement delivers substantial wins for members. It’s a hard-earned victory for our members, their families and our union,” said UAW Vice President Jimmy Settles.