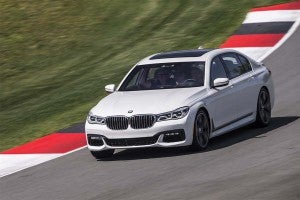 On track: BMW expects models like the new 7-Series to continue boosting its sales.

BMW delivered a 20% surge in third-quarter earnings, but the maker cautioned that a slowdown in the Chinese market could put the brakes on its bottom line in the months ahead.

The Bavarian maker has enjoyed a global surge in demand for its luxury products – while also benefiting from the addition of a number of new models, analyst said.  Demand has benefitted from both the U.S. automotive rebound as well as growing sales in China, which is generally expected to become the world’s largest luxury car market. But how soon is now uncertain.

“We continue to chart a course of profitable growth, with reported figures continuing their upward trend in the first nine months of the year”, said BMW Chairman Harald Krüger, in a prepared statement

For the third quarter, BMW AG reported earnings of 1.58 billion euros, or $1.74 billion, up from 1.31 billion Euros during the July to September period in 2014. Earnings per share came in at 2.39 euros compared to the 2.20 euro consensus forecast, according to FactSet.

That figure underscores the profitability of BMW’s increasingly broad product line-up. The maker is just rolling out an all-new version of its 7-Series sedan flagship, which it bills as the most high-tech product in its history. But it has also moved down-market with models such as the 1- and 2-Series lines. And it has been broadening its array of high-profit models sold through the M performance subsidiary. 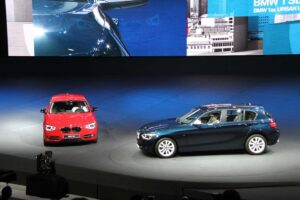 BMW has been expanding its line-up at both the upper and lower reaches of the luxury market.

The recovery of the automotive market in the United States has clearly helped BMW’s bottom line. The Southern California region alone is the largest market in the world for luxury performance products like those M models. But China has been growing at a faster clip – at least until now.

That market’s sales have grown in the single digits this year, after more than a decade of double-digit acceleration. And Chinese sales actually have declined since mid-year.

“BMW’s profitability with a ‘normalized’ China is unclear,” wrote Max Warburton, an analyst with Sanford C. Bernstein, in an emailed research note. “It’s clearly going to be lower than in the glory years but if it’s still high single digit then it’s an impressively resilient performance.”

For its own part, the maker remained upbeat, its financial statement declaring, “Thanks to its attractive range of models, the BMW Group can look ahead confidently to the remainder of the current financial year and reaffirms its targets for the full year. Solid increases, and hence new record figures, are being targeted in 2015 for sales volume and Group profit before tax.”

BMW has not only expanded its model line-up, but also its powertrain family. The automaker has been adding a range of new battery-based models, but is also heavily dependent upon the diesels that currently make up as much as half of all car sales in Europe.

The future of diesel demand has been tossed in the air, however, in the wake of the Volkswagen emissions cheating scandal which already involves around 11 million vehicles sold worldwide.

So far, there has been no evidence other automakers are cheating on their emissions tests, but surveys show widespread consumer skepticism, while regulators around the world are promising an industry crackdown.

“Without diesel it is not possible to meet the EU’s ambitious goals for CO2 emissions,” Krueger asserted in a conference call with reporters on Tuesday. But the maker is rapidly rolling out battery-based alternatives, such as plug-in hybrids, that could eventually become a replacement for diesels.