To Connect or Not to Connect? Federal Regulators Disagree Over New Car Tech 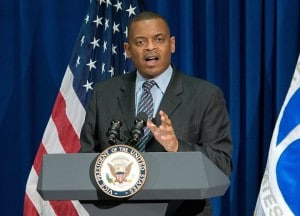 Transportation Secretary Anthony Foxx is pushing for more V2V and V2I based safety technologies on U.S. roadways in the near future.

Maybe they need a better connection. Several senior government regulators have taken what appears to be opposing positions on the need to mandate connected-car technology in the next few years.

While the head of the National Highway Traffic Safety Administration this week said he favors the use of the technology, believing it could reduce accidents, injuries and fatalities, a senior official with the Federal Trade Commission warned Congress this week that rushing connected cars to market could compromise privacy.

Connected-car rules proposed by the Department of Transportation falls short of “providing any substantive protections for consumer data,” warned Maneesha Mithal, associate director of the FTC’s Division of Privacy and Identity Protection.

Connected-car technology actually falls into two separate categories: vehicle-to-vehicle, or V2V, and Vehicle to Infrastructure, or V2I. But the ultimate goal is to create a network of smart cars that would know what is happening on the highway ahead, whether the road is clear, covered with ice or tied up in traffic.

The technology also would help improve the capabilities of the autonomous vehicles expected to start going into production over the next decade, proponents contend.

Mark Rosekind, the head of the NHTSA, has frequently said that connected-car technology could help yield major improvements in automotive safety. He got a first-hand demonstration of what could be in store during a demonstration by the Virginia Tech Transportation Institute this week. It is participating in one of several regional initiatives to test and demonstrate V2V and V2I technologies.

At one point, vehicles equipped with onboard communications systems were able to detect a construction worker on the road because he was wearing a special vest with its own built-in communications equipment.

(Honda jumping into the semi-autonomous car pool in 2020. For more, Click Here.)

“We’re out of the lab. We’re in the real world,” said Rosekind.

Rosekind’s boss, Transportation Secretary Anthony Foxx, gave connected-cars a major push when, in May, he called for a proposal to mandate the installation of the technology on future vehicles.

“Connected, automated vehicles that can sense the environment around them and communicate with other vehicles and with infrastructure have the potential to revolutionize road safety and save thousands of lives,” Foxx said during a visit to Silicon Valley where he may his announcement.

But it was about the same time that hacking became more than just a theoretical concern for the auto industry. In a widely publicized stunt, two tech security professionals showed they could take control of a Jeep Cherokee being driven by a journalist from Wired magazine, ultimately sending it spinning into a ditch. It was just the first of several such demonstrations – though there have been no known instances of hackers actually taking control or even just tapping into a vehicle on the road.

But the more technology that is added to new vehicles the more opportunities that will give to hackers unless new means of protection are developed.

Part of the concern is that vehicles are adding more and more access points for hackers, from the wireless tire pressure monitors already mandated by U.S. law to the new 4G LTE systems many automakers, such as Chevrolet, are now making standard. V2V and V2I technology would create even more gateways, says Kevin Curran, IEEE Senior Member and professor of Computing and Engineering at the University of Ulster, in the UK.

“Anything with communication chip on board can be remotely accessed,” Curran said in an interview. “Given enough sophistication and the person compromising it having the expertise — there’s the worry,” he said.

The debate over connected-car technology could come down to a conflict between safety and privacy – at least unless automotive researchers can do a better job of keeping hackers out.