Nissan Teatro for Dayz – a Car for People Who Don’t Like Cars? 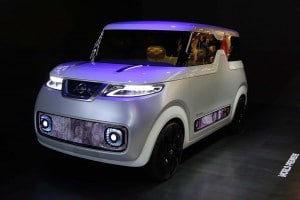 Nissan's Teatro for Dayz concept is a multimedia device designed for share natives, according to CEO Carlos Ghosn.

Were it ever to go into production, we assume Nissan would have to think long and hard how and where to sell it: a traditional new car showroom or an Apple Store.

True, it has four wheels and four doors, but beyond that, the Nissan Teatro for Dayz concept doesn’t have all that much in common with a conventional automobile – perhaps because it seems aimed primarily at a young generation that is ambivalent, at best, about owning a car.

Think of the Teatro for Dayz as “a multimedia device designed for share natives,” suggested Carlos Ghosn, the Japanese maker’s CEO, during a news conference at the 2015 Tokyo Motor Show.

The exterior isn’t necessarily cutting edge. If anything, it will remind you of the boxy Nissan Cube, but it’s the functionality that makes it distinctive. The concept is designed to cater to the desire of younger drivers to have the latest in connected technology while trying to get them interested in cars. 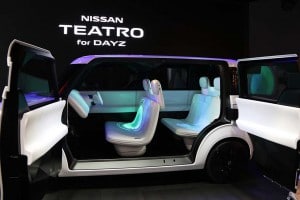 It is designed to cater to the desire of younger drivers to have the latest in connected technology.

These are folks who as likely as not to communicate by text or social postings, even when sitting alongside one another.

And they can use the Teatro to connect and share in a variety of ways. It has, of course, a fast link to the outside world. But you already can get that on a Chevrolet sedan. What you’ll find with the Nissan concept is that virtually every inch of the interior, down to the seats, is a video display screen. There are additional displays outside, including ones built into the bumpers.

“What moves these digital natives is capturing experiences in photos and videos and sharing them,” suggested Hidemi Sasaki, Nissan’s Product Planning general manager. “Friends respond with `likes’ and share the experience further. What’s important is not whether something is experienced personally or virtually. What matters is the process of sharing.” 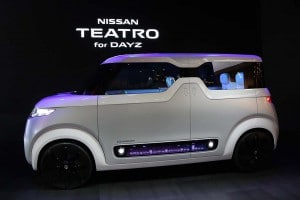 Virtually every inch of the interior, down to the seats, is a video display screen. There are additional displays outside, including the bumpers.

Think of the interior of the Nissan Teatro for Dayz as a sort of clean canvas. When driving, some of those displays are used project the necessary gauges and instruments. But when parked, even the the screens on the IP focus on connectivity, displaying everything from social media links to video games — backed up by “top quality sound.”

Even in driving mode, the displays can be customized, to reflect the seasons, for example, or the mood of the driver. And there’s the requisite onboard camera to share one’s driving experience with friends.

The idea of turning a vehicle into a mobile display isn’t entirely unique. Several other manufacturers have toyed with the concept in recent years, though the latest in display, camera and infotainment technologies make it easier to pull off now. 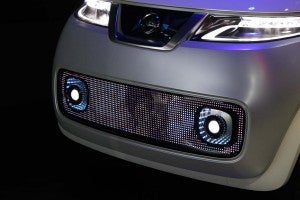 Does that mean Nissan has production plans for the Teatro for Dayz? Not in its current product plan nor, from what we can discern, is it something that could pop up in the next five-year plan. But, like its competitors, Nissan knows it has to come up with a way to draw those share natives into showrooms or it will watch its potential market wither away as more traditional Baby Boomers and Gen-Xers become less of a force.

So, don’t be surprised to see Nissan lift at least some of the basic concepts, including large displays and new levels of connectivity, used in the Teatro for Dayz and use them in future production models.