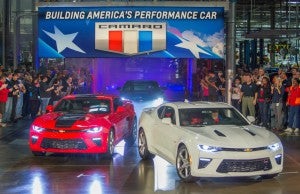 The sixth generation Chevrolet Camaro began rolling off the line at the Lansing Grand River plant in Michigan headed for dealerships across the country.

Chevrolet’s all-American pony car finally returned to the U.S. as the sixth generation models rolled off the assembly line at the maker’s plant in Lansing, Michigan. The new vehicles are the first in more than 20 years to built in America.

The Camaro was introduced in 1967 as a competitor for the Ford Mustang. The first three generations of the sports car were built in California and Ohio – with a small number produced in Switzerland.

However, the fourth generation found its way to GM’s plant in Ste. Therese, Quebec. It shared line space with its Pontiac siblings the Firebird and Trans Am. The company produced them there from 1993 until 2002 when it shut down the Camaro entirely. 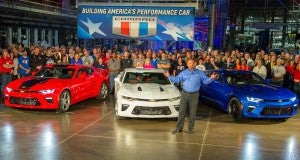 GM's Camaro Chief Engineer Al Oppenheiser speaks during the roll out the 2016 Camaro.

When it reintroduced the make after a seven-year hiatus in 2009, the Quebec site was no more and production was shifted to GM’s massive complex in Oshawa, Ontario.

However, GM’s been fiddling with its production plans and when it began investing big money into the Lansing Grand River site to produce two rear-drive Cadillacs – the ATS and CTS – it made sense to move over its other rear-drive car: the Camaro.

GM has invested about $670 million in the Lansing facility in recent years, including a $174 million stamping facility. The automaker invested $175 million on the facility to accommodate the new Camaro.

“It is an exciting day for everyone involved in bringing the new Camaro from a concept to the assembly line,” said Mike Trevorrow, Lansing regional plant manager, in a statement. “As the transporters head out to dealerships across the country, the hard work and pride of everyone at Lansing Grand River Assembly goes with them.”

(Click Here for details about the new GM-UAW contract.)

The new Camaro will be in dealer showrooms starting in early November. The next-gen models are expected to keep pace with the Mustang in terms of sales and performance.

Starting at $26,695 for the Camaro 1LT and $37,295 for the 1SS, Chevy’s pony car comes with six all-new powertrain combinations: a standard 2.0-liter Turbo and an available, all-new 3.6-liter V-6 in LT models, and the 455-hp LT1 6.2-liter V-8 in the SS, which is the most powerful Camaro SS ever. Each engine is available with a six-speed manual or eight-speed automatic transmission.

(To see more about UAW’s call for a new vote at VW’s Chattanooga plant, Click Here.)

The first vehicles delivered to customers are coupes – SS or LT models with the 3.6-liter V-6. The Camaro convertible and models with the 2.0L Turbo engine will begin shipping in early 2016.