Japanese luxury brand aims for lower entry price – but holds back the numbers. 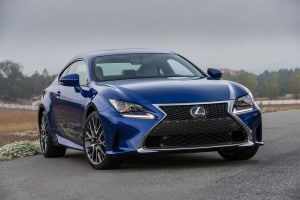 Lexus will offer three different engine options for 2016 on the RC, including a new turbo 200t.

Lexus is adding two new versions of its RC Coupe for the 2016 model-year, and that should be good news for those on a budget.

Echoing moves by a growing list of luxury and performance competitors, the 2016 Lexus RC line will no offer buyers a turbocharged 4-cylinder option, as well as an all-wheel-drive version of the model’s more powerful V-6.

The luxury arm of Toyota also plans to offer more infotainment options for the 2016 model-year, including the optional Lexus Enform Service Connect. Among other things, the maker explains, that will allow an owner “to remotely view information about certain aspects of their Lexus vehicle,” including maintenance and other alerts.

(Lexus RX lands spot among contenders for North American Car and Truck of the year. Click Here for the full list.

It’s growing harder to find a luxury model that doesn’t offer a turbo option these days, though while some focus on high-end performance, the 2016 Lexus RC 2006 will be focus on buyers looking for an affordable entry point for the brand’s sportiest model. While the maker hasn’t disclosed pricing, estimates range somewhere between $39,000 and $41,000 before destination charges/ 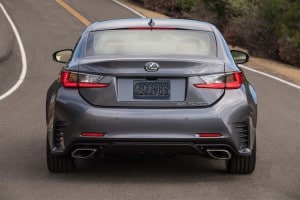 Whatever the final price, the new Lexus RC turbo will get you a 2.0-liter turbocharger making 241-horsepower and 258 pound-feet of torque. The twin-scroll turbo is aimed at reducing off-the-line turbo lag. The engine is paired with an eight-speed automatic and, if the powertrain package sounds familiar, that’s because the turbo-four is shared with other Lexus models including the GS 200t and new NX 200t.

(Click Here to check out the major product announcements from Lexus at the Pebble Beach Concours.)

Lexus will offer three different powertrains for the 2016 model-year. And while the other two engines are carry-over, Lexus RC buyers will now be offered an all-wheel-drive version of the 3.5-liter V-6. Adding that option is no surprise considering that there’s little demand for luxury cars that don’t offer all-wheel-drive in many parts of the country, including the Northeast, Northwest and Rockies.

The other engine option will carry on in the 2016 Lexus RC 350, a 3.5-liter 306-hp V-6 putting out 277 lb-ft of torque. The premium engine can be ordered in either rear or all-wheel-drive configuration. And it will continue to power the high-performance RC 350 RWD F Sport.

That track-capable model gets a few minor tweaks for 2016, including optional new orange brake calipers and a Limited Slip Differential.

While its far from the top-selling model in the Lexus line-up, the RC family may be one of the most important models the maker has introduced in recent years, drawing in a range of younger, hipper buyers that had been steering clear of the maker’s showrooms.