End May Be Near for Dodge Viper 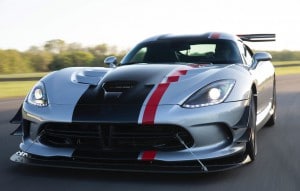 Dodge has tried everything it can to build demand for the Viper, including adding the ACR version.

(This story has been updated to include additional comments from Fiat Chrysler.)

The Dodge Viper SRT was intended to be one of the fastest cars ever produced in Detroit. But you couldn’t tell by the way it’s moving on dealer lots. Despite a big price cut, the two-seat sports car just can’t seem to build much momentum.

So, after launching an all-new version of the Viper in 2012, production is apparently set to wrap up in two years, at least according to a document provided to the United Auto Workers Union as part of recently concluded contract talks.

The last Dodge Viper is expect to roll down the line at the special, low-volume Connor Assembly Plant in Detroit in 2017, the letter indicated, adding that, “No future product has yet been identified beyond the product life cycle.”

While plans could change, it would take a miracle to save the Viper, several sources close to Fiat Chrysler Automobiles suggest. Asked for comment on the letter provided the UAW, a spokesman for FCA wrote, “As part of the tentative agreement reached with the UAW last week, a letter was included which outlined potential future plans for our manufacturing facilities. Connor was included in that letter.

“However, because the ratification process is currently underway, we can offer no further comment on any aspect of the tentative agreement.”

The current Dodge Viper SRT entered a market loaded with sports cars, from the little Subaru BRZ to the mighty offerings from makers like Ferrari and Lamborghini. Closer to home, it debuted just before Chevrolet weighed in with the seventh-generation, or C7, version of the Corvette. But while the ‘Vette has scored big, Chevy struggling to meet demand, the Viper was all but dead on arrival.

(Click Here to check out the new Lamborghini Huracan LP-610-4.) 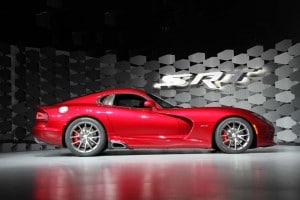 The reborn Dodge Viper made its debut at the 2012 New York Auto Show.

Like the original two-seater launched two decades earlier, the latest version of the Dodge sports car opted for a raw, almost retro sort of performance, far less refined than the new Corvette. It also tacked on a significantly higher price tag.

Despite the headlines that greeted the debut of the Viper following its New York Auto Show debut, potential buyers reacted with a yawn. Fiat Chrysler cut production by a third in 2013 and then temporarily idled the Connor plant a year later.

Dodge tried to correct the pricing problem last year by shaving $15,000 off the Viper’s sticker. That brought a short-term surge in sales, but volume still only hit 760 for all of 2014, and as of the end of September, buyers had only driven off with 503 Vipers this year.

The numbers just don’t justify maintaining a unique assembly plant specifically intended for low-volume manufacturing. At this point, as the October 7 letter from FCA employee relations chief Glenn Shagena indicated, FCA has nothing else that would slot into the Connor plant, likely meaning it would be shuttered, at least temporarily,

FCA leaders reportedly plan to meet next month for a regular review of corporate product plans, so it’s possible they might try something else to save the Viper. And it wouldn’t be the first time the sports car avoided oblivion. After Chrysler emerged from bankruptcy in 2009, entering a trans-Atlantic partnership, new CEO Sergio Marchionne pulled the plug on the sports car in 2010. But work on a new model quietly got underway.

Whether the Viper can, for a second time, prove to be an automotive phoenix remains to be seen. But it would take a major shift in direction to give it the sort of following that has built up around the rival Corvette. And with FCA needing billions of dollars to fund turnaround programs for Italian brands Alfa Romeo, Maserati and Fiat – never mind dealing with the needs of its Detroit-based brands – Viper’s corporate advocates could find it difficult to come up with a viable new business case.