Folding soft top can be operated at up to 17 mph. 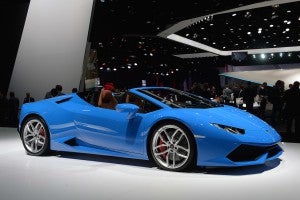 The new Lamborghini Huracan convertible features a soft top, but no appreciable drop in performance.

This year’s Frankfurt Motor Show is a bit of nirvana for those who enjoy driving al fresco. There are new ragtops covering pretty much the entire spectrum, from the little Smart ForTwo Cabriolet up to open-air supercars from both Ferrari and Lamborghini.

The Lambo entry is a Spyder version of the Huracan LP610-4 set to go on sale next spring, replacing the old Gallardo Spyder. The good news is that it will be stiffer, offer more power and a lot more downforce.

There’ll likely be plenty of comparisons to come between the new Ferrari 488 Spider and the Lamborghini LP610-4 Spyder, though for now it’s all on paper, the two new models still months away from production.

A key difference between the two is that where Ferrari makes use of a folding hardtop, Lamborghini opted for a lightweight soft-top design. It increases the sports car’s weight, but only modestly, to 3,392 pounds, or just 30 pounds more than the Ferrari cabrio. Lambo’s can be folded away in 17 seconds, about three seconds slower, but the top can be operated at up to 30 mph. 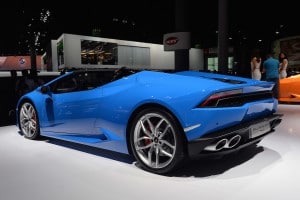 Power comes from the same 5.2-liter V-10 as in the hardtop Huracan, and both make an impressive 602 horsepower and 413 pound-feet of torque.

Power comes from the same 5.2-liter V-10 as in the hardtop Huracan, and both make an impressive 602 horsepower and 413 pound-feet of torque. Since we’ve been making comparisons, that’s about 58 hp and 147 lb-ft less than the Ferrari 488 Spider. Power is directed to all four wheels, as is the Lamborghini norm.

At a time when even supercars have to accept the reality of new emissions and fuel economy mandates, Fuel economy is reportedly expected to be up in the low double-digits, the Huracan LP610-4 Spyder also said to produce 14% lower CO2 emissions than the old Gallardo Spyder, something that European’s are focused on. Give credit to such new features as engine Stop-Start and cylinder deactivation.

(Click Here for details about the tentative deal between FCA and the UAW.)

For everyone else, the numbers that matter are these: you’ll hit 60 from a standing start in 3.4 seconds – about 0.2 seconds slower than with the hardtop Huracan – and top out at 202 mph.

Designers did more than just cut the top off the new Huracan LP610-4 Spyder. They also added new air intakes and new buttresses behind the seats, with rollover protection built in. The lines are slightly different than the hardtop, but the overall look will still be familiar to Huracan fans.

Lambo claims the Spyder will be as quiet inside as the coupe with the top up. When it’s down, there’s a new electrically operated windscreen that pops up to reduce buffeting