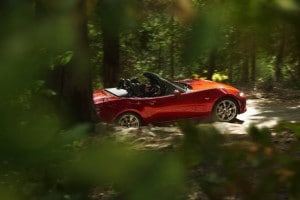 The new Fiat 124 Spider will share platforms with the Mazda Miata, shown here, but get a unique body and its own powertrain options.

Fiat will bring an old name back to life next year when it launches an all-new version of its once-popular 124 Spider.

But it has gotten a helping hand from an unusual ally. The little two-seater will share platforms with the recently redesigned Mazda Miata, and both models are expected to be produced side-by-side at the Japanese maker’s plant in Hiroshima.

That said, company officials promise that the new Fiat 124 Spider will feature a distinctly different look than the well-reviewed Mazda. And it is expected to opt for a different powertrain line-up, as well.

Fiat produced a variety of different versions of the 124 in the 1960s through the 1980s, and it was one of the last models the maker sold in the U.S. before temporarily abandoning the American market. The Spider was actually a 2+2, but the new version will opt for the two-seat layout shared with the 2015 Mazda Miata.

That project actually began as a joint venture between Mazda and Fiat’s sibling brand Alfa Romeo, which is spending more than $5 billion to expand its own line-up. But CEO Sergio Marchionne has ruled that Alfa will only produce Italian-made vehicles, transferring plans for the new convertible to the Fiat brand, instead. 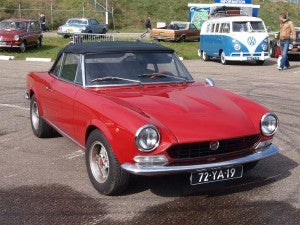 Specific details haven’t been released, but a well-placed source at Fiat Chrysler Automobiles confirmed to TheDetroitBureau.com that the new 124 Spider will be revealed at the Los Angeles Motor Show in November.

It will become the fourth distinct model offered by the Fiat brand in the U.S., joining the little 500 that helped launch the maker’s return to the American market, as well as two more recent additions, the 500L microvan, and the 500X crossover-utility vehicle.

The basic dimensions of the new Fiat 124 Spider will match those of the latest Mazda Miata, to a large degree, though the body is expected to be distinctive enough the two won’t readily be confused. The two partners appear to want to avoid the mistake made by Toyota and Subaru when they jointly developed a new sports coupe sold in the U.S. as the Scion FR-S and Subaru BRZ. They are virtually identical but for their badges.

(Fiat Chrysler CEO Marchionne threatens to put GM in a “bear hug.” Click Here to find out why.)

The Miata and 124 Spider powertrains are expected to be even more distinct, meanwhile. For the U.S. market, Mazda opted for a single powertrain, a 2.0-liter inline-four making 155 horsepower and 148 pound-feet of torque. It has so far expressed no interested in adding a higher performance option, leaving that up to aftermarket tuners.

Fiat, on the other hand, has been caught testing several prototypes that appear to use several different powertrain packages, including one that is expected to carry the Abarth performance badge.

The base model is expected to share a turbocharged 1.4-liter package now used in models such as the 500 Abarth, the 500L, 500X and Jeep Renegade. The 124 Spider Abarth, however, would get a 1.75-liter turbo engine shared with the Alfa Romeo 4C. It could turn out as much as 237 horsepower, according to some sources.

Like the Alfa, the bigger engine may only be paired with a double-clutch gearbox.

(Is something big coming for Fiat in the form of the Aegea concept? Click Here to check it out.)