A New Dawn for Rolls-Royce

British maker calls it the “sexiest Rolls-Royce ever built.” 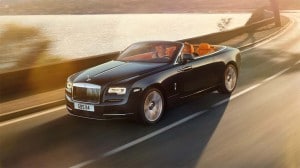 The new Rolls-Royce Dawn shares only its door panels with the existing Wraith coupe.

Is this “the sexiest Rolls-Royce ever built”? Apparently, the British maker thinks so, and allowing one pun to slip in, this really may be a new Dawn for Rolls.

The new Rolls-Royce Dawn is aimed at bringing in a new, younger – but still extremely affluent – group of buyers. What they’ll get for their money is perhaps the most lavishly outfitted ragtop to ever hit the road, the top neatly stowing away beneath an electrically operated tonneau cover finished in open-pore wood.

The $300,000 convertible – make that Drophead in Rolls lingo — shares its platform with the Ghost sedan and Wraith coupe, as well as the 6.6-liter V-12 engine that resides under its bonnet, or hood as we Yanks call it. That twin-turbo package punches out 563-horsepower, more than enough to put some wind in your hair on even the most calm of days. 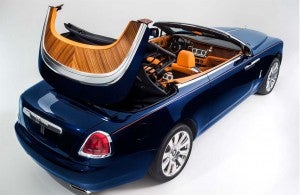 Dawn's top can operate at speeds up to 31 mph and can raise or lower in just 22 seconds.

Unveiled in a special webcast briefing barely a week before its formal launch at the 2015 Frankfurt Motor Show. Rolls claims 80% of the body panels on the Dawn are unique, though the doors are shared with the Wraith coupe. The face pulls forward a bit, but the grille gets more of a rake, giving the Dawn less of the stiff-upper-lip, formal feel of prior Rolls convertibles.

Compared to the Ghost, the Rolls-Royce Dawn has its wheelbase shortened by about seven inches, though its track is slightly wider.

That said, Rolls officials made it clear this is not a classic 2+2 convertible, suggesting that for the British maker “mathematical norms don’t always apply.” The rear is nearly as roomy as in the Ghost, and certainly just as plush.

(Bentley getting ready to reveal its new Bentayga SUV. Click Here for the story.)

The top, the maker boasts, can be operated “in total silence,” and takes just 22 seconds to raise or lower – at speeds up to around 31 mph. Once in place, the multi-layer design ensures that passengers “are not inconvenienced by noise.” 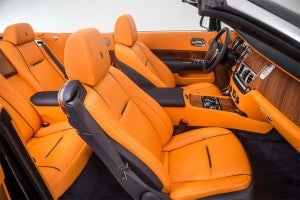 No 2+2, Rolls claims Dawn is a true four-seater.

That, is until the driver kicks down the throttle. That big V-12, with its 575 pound-feet of torque channeled through an 8-speed ZF automatic, will get you off the line fast, the 5,644-pound behemoth able to launch from 0 to 60 mph in a mere 4.9 seconds, Rolls claims.

As with past and present models, the new Rolls-Royce Dawn will be offered in a wide range of colors – with a buyer able to call for extensive customization. The car displayed at the Tuesday unveiling featured a subdued “Midnight Sapphire” paint, offset, as the Dawn’s top rolled back, by a bold “Mandarin Orange” interior.

The British marque plans to begin deliveries early next year, but if you want one you may have to stand in line no matter how big your bank account. First-year orders for the Rolls-Royce Dawn already have been completed and there’s already a waiting list, the maker says. So, expect to wait more than a few Dawns.

(Only the most elite. Click Here to visit the 2015 Pebble Beach Concours d’Elegance.)