But the wait may pay off with new features coming on '17 plug-in. 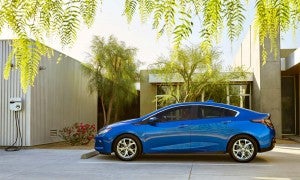 The 2016 Chevrolet Volt will get a 40% boost in its battery-only range.

Chevrolet’s much-anticipated, second-generation Volt plug-in hybrid will make its initial sales debut in only a small number of U.S. states, with the  PHEV unlikely to reach many parts of the country for another year or more, according to internal documents and sources briefed on the roll-out plan.

Parent General Motors initially plans to focus on 11 so-called CARB states that have adopted the tough Zero-Emission Vehicle, or ZEV, mandate enacted by the California Air Resources Board. Those states, which also include New York, New Jersey and Oregon, account for the vast majority of battery-based vehicle sales.

The delay reflects a number of different factors, GM spokesman Kevin Kelly noting, “We’re just being more focused on where we have had the highest demand historically.” California, he said, currently accounts for 40% of Chevrolet Volt sales, “so that’s our primary focus.”

Additionally, the late roll-out of the 2016 Chevrolet Volt means a shortened first model-year. But Chevy also hopes to avoid some of the mistakes that it made during the launch of the original Volt in late 2009. A staggered launch means it can put more resources into training dealers to both understand the new plug-in hybrid and to get them in position to service the car.

(BMW going to a plug-in powertrain for next-generation M3. Click Here for the exclusive report.) 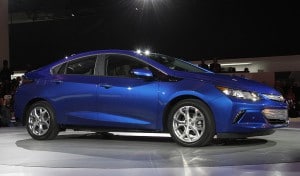 The second-generation Chevy Volt will have a limited run for the 2016 model-year.

The second-generation Volt made its debut at the Detroit Auto Show last January. It gets a design makeover, inside and out, and with a smaller, more energy-dense battery pack it now can squeeze in five passengers rather than four, as with the original model.

The 2016 Chevy Volt will also deliver about 40% more range, letting it travel about 53 miles on a charge before having to fire up its range-extending internal combustion engine. The more powerful gas engine will help improve performance, meanwhile, cutting about a half-second off the PHEV’s 0 to 60 times, and even more off its 0 to 30 launch performance.

But customers in the remaining 39 states and the District of Columbia won’t have to wait long. The order system in the rest of the country will be up-and-running in December, Kelly confirmed. And while an official on-sale date has not been announced, sources indicated deliveries likely will begin in February, the same schedule used for the expanded roll-out of the first-generation Chevy Volt.

Meanwhile, there may be some silver lining the cloud for buyers who had to wait. While there will be no mechanical changes with the 2017 Volt, the plug-in will get some additional features. The initial, 2016 models will feature the new Apple CarPlay infotainment technology, but Chevy will then add Android Auto as standard equipment for 2017.

Radar-guided active cruise control will become an option, as well, and there will be additional colors offered, including a subdued green seen on a Chevrolet Volt used in the recent Disney movie, Tomorrowland.

In the long-run, a few months delay in lower-volume markets likely won’t have an impact on the Volt, but other factors could. That notably includes the ongoing slide in fuel prices which, TheDetroitBureau.com is reporting, could dip to just $2 a gallon nationwide by year-end.

Virtually all battery-based vehicles, from conventional hybrids to pure battery-electric models, have been sliding in recent months. That even includes the Toyota Prius, the world’s best-selling hybrid. Volt sales for the first eight months of 2014 were down 36.7% on a year-over-year basis. Some of that was due to buyers choosing to wait for the new model, industry analysts caution.

But Volt has repeatedly missed its sales targets and it’s anyone’s guess whether it will do better now, even with all the improvements in the new model.