Your Next BMW Could Spot the Red Light Before You Do

EnLighten feature could save time, fuel, and reduce crashes. 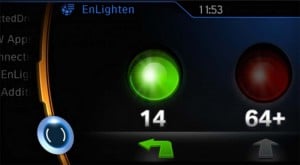 BMW's version of EnLighten will show you what the next light is, and how fast to drive to get there before it changes.

If you’ve ever gotten stuck behind one red light after another during your daily commute, you’ll likely appreciate a new feature BMW has developed that could save you time, gas and a fair bit of frustration.

The maker is working with an Oregon tech start-up to give its drivers an advanced alert letting them know when the next stoplight is about to go green or red, and suggest the best speed to avoid a wait.

In a growing number of cities, stoplights are being linked up in a regional network. They operate in sequence and may even adjust their timing to improve traffic flow. The EnLighten app, developed by Connected Signals, of Eugene, Oregon, can tap into those urban networks and determine when you’re approaching a light using a smartphone’s GPS feature. The system can then figure out whether the light is going to be red or green.

The Enlighten app is already available as an app for iOS and Android smartphones. But BMW is going the next step. For Apple users, it has developed a system that can read the app and display it on your instrument panel – but only on cars equipped with the optional BMW Apps feature.

The display does more than report the obvious, that a light has turned red or green. Among other things, it will give an alert when the light is about to change. And it will predict whether you need to speed up or slow down to make the light. The BMW version of the EnLighten app is even smart enough to recognize when you have a turn signal on, so it can alert you if there’s a separate green arrow for a left turn.

The information is displayed on the multi-information display, or MID, in the center of the BMW gauge cluster.

Connected Signals claims to monitor “10,000 lights in over 100 cities and towns.” That includes some overseas, including stoplights in Christchurch, New Zealand. For the moment, the BMW version only works in three U.S. markets, Portland and Eugene, Oregon, and Salt Lake City. The standalone EnLighten app also functions in Las Vegas, and both Walnut Creek and Arcadia, California. But the company claims it will be adding a number of other cities in the near future.

There have been some questions raised about the accuracy of the smartphone-based system which relies on GPS, and some reports have questioned whether EnLighten could prove to be a driver distraction.

But proponents contend such technology could smooth out traffic flow and, in the process, save fuel while also reducing the number of crashes caused by drivers racing to make it through a light. The EnLighten system could monitor users to recognize if one is about to run a light.

(Is BMW ready to partner with Apple on a rumored iCar? Click Here for the latest.)

Indeed, the basic concept could be integrated into the connected vehicle technologies now under development. So-called Vehicle-to-Vehicle and Vehicle-to-Infrastructure, or V2V and V2I, systems will allow cars to communicate digitally with one and another and with a highway monitoring system. Among other things, this would provide a way to alert motorists to traffic jams, crashes and weather problems.

A major test program recently was announced covering more than 100 miles of freeway in metropolitan Detroit. And the National Highway Traffic Safety Administration is considering whether to mandate connected car technology in the near future. It is considered a critical step in the development of tomorrow’s autonomous vehicles.

(How widespread is the automotive hacking problem? Click Here to find out.)