Take Me to The No-Prototype Honda Pilot 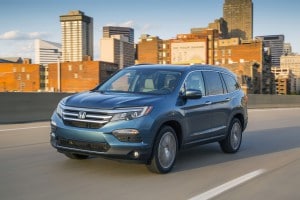 Honda implemented its No Prototype Development system when it designed and built the 2016 Pilot.

Honda is demonstrating its willingness to be a manufacturing leader with its newest SUV. The Japanese maker added the new 2016 Pilot to its portfolio of trucks and utility vehicle without building a single prototype.

Carmakers have used hand-built prototypes for decades and were long considered a key step in engineering a new vehicle. After they are fabricated, the prototype, or prototypes, are then used to set up the assembly line for building the production vehicle. But Honda R&D and Honda Manufacturing of Alabama skipped the prototype process and set up the assembly line for the new Pilot in Lincoln, Alabama, without building a single prototype – saving time and money.

Jeff Tomko, president of Honda Manufacturing Alabama, said during a presentation in Detroit that the new Honda Pilot was the Honda vehicle designed and engineered in the U.S., using only “virtual” systems and tools to set up the assembly line.  The “No Prototype Development,” or NDP, eliminated the need for creating the prototypes, Tomko said.

Fully redesigned from the ground up in form and function, Honda executives believe the third-generation 2016 Honda Pilot is the benchmark in the three-row mid-sized SUV segment. The automaker is using the same virtual tools to prepare the replacement for the Ridgeline pickup truck, which is due during the first half of 2016, Tomko said. 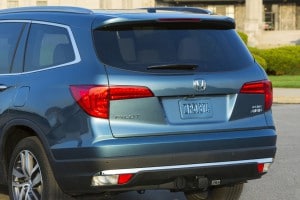 The new Pilot SUV was completely designed, engineered and built in the U.S.

Honda hasn’t quantified the savings from switching to NDP, Tomko said. But manufacturers routinely spend close to $1 million on each of the hand-built prototypes, which are used to dimensions, gaps and how the vehicles various pieces fit together, he added, who said part of the challenge of NDP was getting the 150 different suppliers that make components for the Pilot to agree to virtual processes.

In addition, the associates preparing the assembly line in the Alabama plan had to be familiar with the virtual programs, which required learning and interpreting the computer images generated by the Catia system used by Honda’s engineers to design and process the vehicle.

Besides the savings in time and money, Tomko said replacing the prototypes with a virtual process improved quality. As the pieces of the first of the production vehicles were loaded onto the assembly line, the manufacturing staff provided input into the vehicle’s engineering and design. Honda also used 3-D printers to create some of the components to make sure they would fit into the vehicle as it rolled throughout the assembly process.

The 3-D printer was especially helpful in solving the problems, involving the layout of the wires behind the firewall and the placement on the steering column of the electric motor the drives the Pilot’s electric power steering. The employees, or associates who will build the vehicle in the Alabama plant, also provided dozens of suggestions that help.

The all-new 2016 Honda Pilot SUV, with seating for eight, was designed and developed in Los Angeles and Ohio, and is manufactured exclusively in Alabama where Honda builds trucks and SUVs that are not only sold in the U.S. but also exported to 46 different markets around the world.

Since its arrival in 2003 as the first three-row, mainstream SUV to be developed on a car-like unit-body platform, the Pilot has helped set industry standards.

The 2016 Pilot also ups the ante for premium refinement with major upgrades to interior quality and more standard comfort and convenience features on all trims, along with the addition of a new, line-topping Elite version that offers a series of Honda-first features including 20-inch wheels and tires, ventilated front seats, heated second-row seats, a heated steering wheel, a first-ever panoramic glass roof and many other premium family SUV features.

(Click Here for more about the higher tech 2016 Honda Accord.)

The 2016 Pilot is powered by a direct-injected 3.5-liter, V-6 engine with Variable Cylinder Management producing 280 horsepower and is matched with two new advanced transmissions. The technologies, combined with a nearly 300-pound reduction in vehicle overall weight, improved aerodynamics and reduced running resistance, also make this the most fuel-efficient offering in the midsize SUV segment, with EPA fuel-economy ratings improved by as much as 2/2/2 mpg city/highway/combined over the previous model.

(To see more about Honda’s new CEO’s plans for a turnaround, Click Here.)

“This third-generation Pilot reaches higher into the premium end of the three-row SUV market than ever before with a new line-topping Elite model that will give us an even stronger foothold at the upper end of the midsize SUV segment.”