NHTSA may probe for potential problems with older airbags. 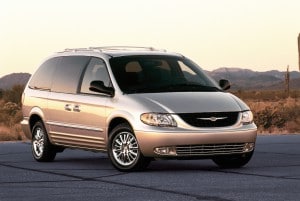 A report of an exploding airbag in a 2002 Chrysler Town & Country produced by ARC Automotive spurred an investigation by federal safety officials.

A second supplier of airbags is under investigation, according to federal automotive safety regulators.

That could pose a major problems in light of the ongoing recalls involving Japanese supplier Takata Corp. More than 40 million vehicles have so far been impacted by the Takata crisis – including another 4.5 million covered by an announcement from Honda last week.

The National Highway Traffic Safety Administration today said it is looking into reports of misfiring airbags in Chrysler and Kia vehicles using technology supplied by ARC Automotive Inc. Sources at several automakers have told TheDetroitBureau.com that NHTSA is looking to see if the issue of malfunctioning airbags is broader than had been previously reported.

The ARC airbags were used in 420,000 older Chrysler Town and Country minivans and 70,000 Kia Optima minivans. Unlike the Takata airbags now linked to at least eight deaths, there have been no reported fatalities involving the ARC supplemental restraints, though there were two injuries.

NHTSA initially received a report of an airbag problem involving a 2002 Chrysler minivan last December, though the actual incident took place in 2009. The safety agency initially ruled the problem an isolated incident but decided to take another look when, last month, it learned about a lawsuit involving the malfunction of an ARC driver’s side airbag inflator in a 2004 Kia Optima.

No other known problems have so far been reported involving ARC airbag inflators.

Both makers are reportedly working with NHTSA. ARC, based in Knoxville, Tennessee, issued statement saying it has a 60-year record of “serving our customers with products that meet the most stringent global safety standards.” It also said it is cooperating with the NHTSA probe.

Airbags are designed to be triggered in specific crashes. Once sensors determine the need to add supplemental restraints, explosive squibs are triggered, creating a rush of hot gas that, in turn, causes a cushioning bag to emerge from a hiding place in the steering wheel, instrument panel, or some other part of the vehicle.

In the case of Takata, investigators have yet to figure out precisely why some airbags have failed catastrophically, the inflators firing off much more aggressively than intended, sending shards of metal and other shrapnel flying into the passenger compartment. Some evidence has pointed to a manufacturing problem at two plants in North America, but there is growing concern that the ammonium nitrate used by Takata in its inflators can grow unstable over time and ignite erratically.

That does not appear to be the problem with ARC, at least according to preliminary reports about the incident that occurred in January 2009 involving the Chrysler minivan. In that case, initial signs point to an obstacle blocking the flow of gas from the inflator system.

Whatever the precise reason, the report filed with NHTSA by the owner said the airbag misfired during a collision with a snowmobile, sending “shrapnel went into her chest, with the airbag plate breaking apart, striking her in the chin, breaking her jaw in three places.” The owner added that, “If it hadn’t been for a great ambulance crew, she would have bled to death.”

(Click Here for details regarding the addition of 4.5 million more Honda vehicles to the Takata recall list.)

ARC was a second-tier supplier, its inflators used in airbag systems sold by both Delphi Corp. and Key Safety Systems. It has not been revealed if its technology was also used in other products beyond the Chrysler and Kia models currently under investigation by NHTSA, but the number could expand, as has happened with Takata. The Japanese supplier’s problems now impact at least 10 automakers worldwide who have recalled over 40 million vehicles.

First mandated in 1989 as part of a federal supplemental restraint law, airbags are now required in all vehicles and it is not uncommon for some models to have as many as 10 of the devices onboard. Safety experts have credited the technology with saving thousands of lives, but experts are becoming concerned that as airbags age they could develop problems, particularly with their inflators, due to the conditions a vehicle can occur during its operation.

Several manufacturers have told TheDetroitBureau.com on background that they have been informally approached by NHTSA to see if they have experienced reports of unexpected or unexplained problems involving older airbags.

(Better mileage, road manners push sales of CUVs, SUVs past those of sedans in U.S. Click Here for the report.)

NHTSA has so far not replied to a request for comment.