Is BMW Set to Abandon Manual Transmission for M Models? 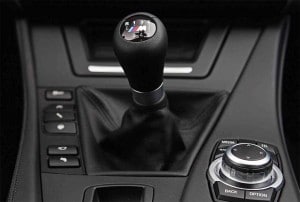 BMW M's manual may be an endangered species.

Like Mark Twain, reports of the demise of the manual transmission may be premature. But it’s increasingly looking like the stick shift is headed for life support, and BMW’s performance M sub-brand is reportedly ready to pull the plug.

The head of BMW M told Britain’s Autocar that future models may offer buyers a choice of only dual-clutch or automatic transmissions. That wouldn’t be out of line with broader trends, several other makers already reducing or eliminating manuals entirely. Meanwhile, M chief Frank van Meel also suggested that BMW may be ready to wave a white flag and opt out of the ever-escalating horsepower wars.

“From a technical standpoint, the future doesn’t look bright for manual gearboxes. The DCT and auto ’boxes are faster and they have better fuel consumption,” van Meel told AutoCar. But he added that while “difficult to say we’ll stick to the manual…we still have a big fan community for manuals and we are not going to take away something the customer wants to have.”

Van Meel was talking about only the M side of BMW, so his comments can’t necessarily be construed to reflect what might happens elsewhere in the company. Many buyers still like manuals, especially in Europe and in market segments more focused on fuel economy than performance.

But just about everywhere these days, “The market is definitely moving away from manual transmissions,” noted BMW spokesman Dave Buchko.

(BMW speeding up roll-out of new plug-in line-up. Click Here for the latest.) 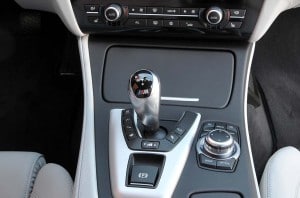 Going forward, BMW M may stick with automatics and double-clutch transmissions like this one.

In the U.S., stick shifts account for well under 10% of the market and have been abandoned on the vast majority of new vehicles, with those remaining tending to fall into three categories: high-mileage models, econoboxes and performance cars.

But where manual transmissions traditionally offered the best mileage that is no longer necessarily the case, especially on vehicles where new, 7-, 8- and 9-speed automatics are available. Those same, super-efficient gearboxes, along with newer dual-clutch transmissions, also tend to be faster shifting than even the best manuals.

The automatic offered on the Chevrolet Corvette Stingray and the DCT on the Porsche 911 both shave a few tenths off the 0 to 60 times compared with their available manuals.

If BMW drops the manual in its M line-up it would just echo the strategy of Mercedes-AMG which has never had a stick in its line. “There are just fewer compromises” with automatics, said that brand’s boss Tobias Moers, in terms of mileage, performance, and also drivability both on track and day-to-day.

While Aston Martin has not ruled out future manual transmissions, one is not available on newer models like the Vantage V12 S. And try to find a stick in any Lamborghini product. Ferrari and Porsche have been, er, shifting away, as well, the latter leaving off the manual transmission checkbox when it launched the latest 911 Turbo and GT3 models.

(To Hell (Michigan) and back in the 707-hp Dodge Charger Hellcat. Click Here to share the drive.)

On a separate note, BMW M planners apparently have come to the point where they’re asking themselves how much power is too much? And they seem to be drawing the line at the magical number 600. 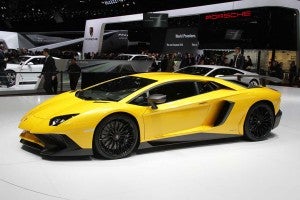 The sub-brand has already gotten there with the BMW M5 30th Anniversary Edition but is only about 560 for the standard M5 and M6 models, and with a mere 425-hp the M3 and M4 editions have room to grow.

Nonetheless, “We’re at the limit. If you go on adding more horsepower and torque, it’d probably be over the limits,” van Meel told AutoCar.

While 600-hp might sound like plenty – and it wasn’t all that long ago when 400 ponies seemed a likely limit – automotive engineers keep finding ways to pack in more power. Ferrari and Lamborghini, of course, have already blown through the barrier that BMW M is ready to erect. So has the American side of Fiat Chrysler with the 707-hp Dodge Charger and Challenger Hellcat twins.

So, should Mercedes-AMG and Audi RS ignore the limits the Bavarian are setting, well, it’s anyone’s guess whether BMW will simply wave them on.

(Lotus amping up its sports car game with new 3-Eleven. Click Here to check it out.)