Getting a first drive of the new 2-Series Active Tourer eDrive. 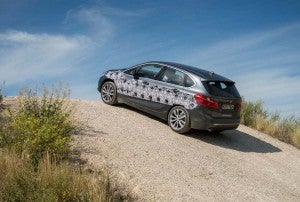 This PHEV version of the new 2-Series Active Tourer will be one of four BMW plug-ins coming to market in the months ahead.

For BMW, 2016 is going to be the year of the PHEV. Forget low fuel prices the Bavarians are convinced plug-ins are here to stay, and they’re rolling out and assortment of new models that pick up on the technology first introduced with the exotic BMW i8.

In a matter of months, we’ll see four plug-based models, including versions of the X5, 2 Series Active Tourer, 3 Series and 7 Series.

Why now? There are all sorts of reasons. For one thing, few expect today’s low fuel prices to last, even in the United States. And tough new emissions and mileage standards will be phasing in over the next decade, making it difficult for luxury manufacturers to remain on the market without adopting cleaner and more efficient powertrain technologies.

A number of countries – and in the U.S., various states – now offer hefty incentives for plug-based vehicles that often offset the added sticker price. There are other incentives, as well, including such things as access to California’s faster-moving commuter lanes. And, longer-term, a number of cities may simply ban access to vehicles not running on alternative power. Motorists already get a free pass in London where gas-powered vehicles are subject to a costly commuter fee. 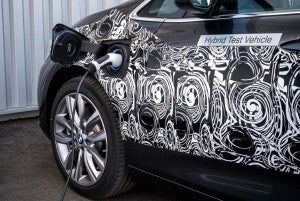 The 2-Series Active Tourer will need as little as 2 hour or so to get juiced for 27 more miles.

Neil Fiorentinos, Managing director of BMW Group Netherlands, said during a media update today that BMW is convinced that buyers’ behavior will change from very rational to emotional. The goal is to make these new plug-in models as satisfying to drive as BMW’s conventional products.

I got to drive the X5 xDrive 40e this spring, and this week logged some seat time in the 2-Series Active Tourer eDrive, as well.

While the small plug-in will likely get a new name by the time it reaches production, BMW has locked down much of the rest of the details, starting with the combination of a 1.5-liter 3-cylinder gasoline engine with an electric motor BMW is producing itself.

The plug-in hybrid drive line is based on the concept that is used in the i8 and offers xDrive all-wheel drive, which is automatically activated when the system recognizes certain road conditions.

The combined output is 220-horsepower with 284 pound-feet of torque, which allows the car to accelerate from 0-62 mph in about 6.5 seconds. 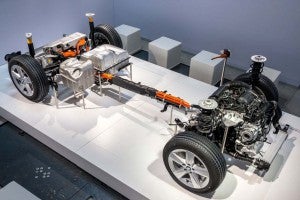 A look at the powertrain and suspension layout of the 2-Series Active Tourer PHEV.

The 7.7 kilowatt-hour  lithium-ion battery is good for  up to 24 miles of pure electric driving at speeds of up to 80 mph, although range slides the faster you drive. The average fuel consumption according to the EU cycle is approximately 2.0 liters per 100 km with less than 50 grams of CO2. Again, in the European cycle that translates into 117 mpg.

That would be at least 25% less based on the U.S. EPA tests, though for now the 2-Series Active Tourer eDrive – or whatever it’s ultimately called – likely won’t come to the States..

The combined gas/electric range is 342 miles. Charging via a 220-volt Level II charger takes 2 hours 15 minutes, plug into a European socket and you add an hour.

BMW plans to start the roll-out of its new PHEV models first with the X5 xDrive 40e, and will then bring the rest of the plug-based mix to market.

Expect to get a first look at the plug-based version of the next-generation 7-Series at the Frankfurt Motor Show in September. That model will certainly be offered worldwide – and will face a range of competitors including a plug-in version of Cadillac’s new CT6 flagship.

Mercedes-Benz, meanwhile, has said that it plans to have 10 new plug-in models in its own line-up by 2017. It recently revealed the first of these, the plug-based version of the newly renamed GLE sport-utility vehicle.

(Click Here for a test drive of the new Hyundai Sonata Hybrid and Plug-in Hybrid Models.)