Tech company wants use of "auto" only bandwidth. 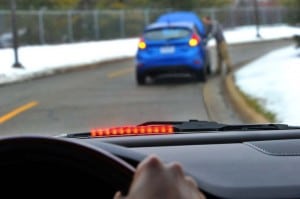 Automakers are asking the FCC to deny a request by Qualcomm for space on the wireless spectrum dedicated to automakers.

In a preview of the car wars of the future, an alliance of automakers is asking the Federal Communications Commission to reject a proposal from Qualcomm, Inc. allowing certain unlicensed wireless devices to operate in the portion of the wireless spectrum that has been set aside for vehicle-to-vehicle communication systems.

In a letter to the FCC, the U.S. Department of Transportation and the automakers asked the FCC not to allow the change. The dispute illustrates the growing competition between automakers and tech companies over the control of key systems in future vehicles.

Since 2012, the DOT has financed experiments in V2V. The largest effort takes place in Ann Arbor, Michigan. Managed by the University of Michigan Transportation Research Institute (UMTRI), the program is testing several different accident-prevention approaches, including warning systems that alert drivers to hazards such as a pedestrian ahead or a car moving into an intersection from the side. Cars and trucks owned by study participants have been retrofitted with the aftermarket equipment necessary to detect other cars and deliver warnings if they get too close to each other.

The rest of the cars, trucks and buses participating in the safety study have been retrofitted with only dedicated short-range communications (DSRC) radios that broadcast basic safety messages about surrounding automobiles’ speed and location 10 times per second among this smaller fleet. Messages travel on a special Wi-Fi spectrum designated for vehicle-to-vehicle (V2V) communication. The FCC has reserved 75 megahertz of spectrum in the 5.9-gigahertz band specifically for DSRC-equipped intelligent transportation systems, according to UMTRI.

The DSRC signal extends more than 300 meters in all directions, so and unlike unidirectional radar or a sensor, it can pick up the signal of another car approaching too closely from any angle. The “here-I-am” message cannot be blocked by another car, so it can, for example, detect a hazard two cars ahead.

In March, Qualcomm announced a new product aimed at automakers and motorists. In addition to leading LTE features, these multimode modems from Qualcomm provide support for all major 3G/2G cellular standards, on-chip integration of global position support and built-in software for key global regulatory mandates like EU eCall, according to Qualcomm.

The Snapdragon X12 and X5 LTE modems for automotive inter-work with a companion Qualcomm chip set with superior Wi-Fi/BT to support consumer features like Wi-Fi hotspots and safety applications like vehicle-to-vehicle and vehicle-to-infrastructure with a seamless combination of Wi-Fi, DSRC and LTE, San Diego-based Qualcomm said.

“With smartphone connectivity setting the pace for advanced features, consumers expect the same experience from all other connected devices, including their car,” said Kanwalinder Singh, senior vice president of business development for Qualcomm Technologies, Inc. “Qualcomm Technologies already supports first-generation LTE connected cars with major automakers. We are now pressing ahead with the vision of LTE for all automakers, cars, geographies and models with the leading performance of the X12 and the leading value of the X5.”

(To see more about the newly revamped Fiat 500, Click Here.)

“The effect of LTE on connected telematics and infotainment inside the car is transformational, rivaling the one from feature phones to smartphones,” added Singh. “Ubiquitous connectivity to cars is enabling industries like automotive, wireless operators, and insurance to come together in unlocking value for consumers. In addition, the cars of tomorrow will not only inform and entertain the consumer, but also communicate with their environment to make driving safer,” he said.