Growth of trucks due to gas prices forces change. 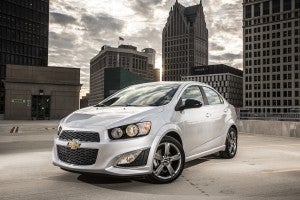 Sales of the Chevrolet Sonic subcompact have fallen off sharply this year.

U.S. new car sales are on a torrid pace, but that’s small comfort to the 100 workers at General Motors’ Orion Township assembly plant who will be idled for at least six months.

Demand for the small Chevrolet Sonic and Buick Verano models they build at the suburban Detroit facility has fallen by double digits since the beginning of the year, with analysts seeing little likelihood of a turnaround anytime soon. But GM isn’t alone. Ford Motor is in the process of cutting about 700 jobs at the plant near Detroit that produces models such as the compact Focus sedan and C-Max people-mover.

Further cuts could follow across the industry, analysts caution, as American buyers drift away from the small, fuel-efficient models they craved when gas was nearing record levels earlier in the decade in favor of bigger SUVs, pickups and other less-efficient models.

“All our other plants are doing well,” said Ford spokeswoman Kristina Adamski. “We can’t build enough trucks or SUVs,” such as the all-new 2015 Ford F-150 pickup that is in such high demand suppliers are having trouble meeting the maker’s orders.

There are a few exceptions, such as the recent redesigned and widely hailed Honda Fit, which has seen sales jump 70.8% since the beginning of the year. But the subcompact segment is down 3%, despite the overall boom in the U.S. market. Sales of the Chevy Sonic are down 28.5% for the first five months of 2015, the Buick Verano off 15.6%.

And it’s not just a Detroit problem. The little Kia Rio is down 25.7% for the year-to-date. The Hyundai Accent did a little better, with a 3.1% increase since January, but the bottom fell out in May, when sales slid 27.6%.

Compact cars and mini cars have done only slightly better, on the whole, than subcompacts. Even midsize cars have been losing momentum, sales dropping 6.7% last month, the segment losing nearly a point of market share, at 14.2% of overall new vehicle sales, according to data tracked by Kelley Blue Book.

In decades past, manufacturers might have attempted to weather the current market climate, maintaining production levels and using incentives to move buyers into weaker product lines. Since emerging from the Great Recession, however, industry planners have been trying to more closely link production with sales, even if that means slowing down assembly lines.

(Adding a teen will nearly double a parents’ auto insurance bill. Click Here for the report.)

At the Orion plant, GM is “adjusting production capacity to better meet market demand,” said a spokesperson, even though that will force it to lay off 160 hourly workers next month. They’re not expected to come back to the plant until at least the end of the year.

That follows a series of one-week shutdowns in February, March and April at the plant where GM had invested $545 million at the beginning of the decade, moving production of the Chevy Sonic back from a plant in South Korea. The Orion plant also will shut down entirely for three weeks, starting on June 29.

Separately, GM recently ordered an early end to production of its Chevrolet Volt plug-in hybrid due to low demand – a problem afflicting most plug-based models. It hopes to regain some momentum later this year when it launches an all-new version of the Volt.

Ford, meanwhile, has had 10 weeks of downtime in recent months at plants in the Detroit area, including the Wayne, Michigan, facility that produces the Focus and C-Max models. As part of its contract with the United Auto Workers Union, however, many of the workers idled by the elimination of the third production shift at Wayne will fill slots open at other nearby facilities.

(Click Here for more on the cuts at Ford.)

Ford, like its cross-town rival, is actually struggling to meet demand for products like the F-150 pickup and Explorer SUV. It has cut back on its traditional, two-week summer factory break. About a third of GM plants also will remain open all summer.