Slowpokes could be hit with $500 fines. 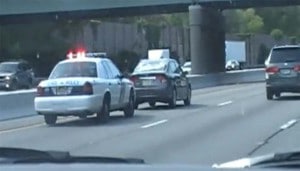 Speed up or get out of the way.

That’s the message from Indiana lawmakers who have passed a new law that could lead to fines of as much as $500 for slowpokes who refuse to move out of the left lane when traffic piles up behind them.

The Hoosier State becomes one of a handful to specifically targets left lane hogs, though the majority of other states have broader laws that allow police to ticket motorists obstructing traffic or who fail to exit the left lane after passing. Lawmakers in Oregon, meanwhile, are expected to put a similar bill onto the books this year.

“When I drive, I pass on the left and then get back to the right,” said Indiana GOP Rep. Judd McMillin, the sponsor of the bill that will go into effect on July 1st, just in time for the Independence Day holiday, one of the busiest times of the year on America’s highways.

While the new measure has generated some criticism – skeptics contending it actually will encourage speeders to drive even faster – the Indiana bill also should click with many motorists tired of getting stuck behind a slowpoke welded into the left lane doing 10 mph under the speed limit.

A recent study of road rage by GfK, conducted for travel service Expedia, found that left lane hogs are third on the list of those likely to get other drivers’ blood boiling – behind only texters and tailgaters.

Under the new Indiana law, police will be able to ticket a motorist who remains in the left lane rather than yielding to faster drivers. The fines can be up to $500, though a report in USA Today indicated authorities expect most tickets will be for a lower amount.

In Georgia, which started enforcing a similar law last July, the fine can run as high as $1,000, though that is determined by each individual county. So far, state police alone have issued over 300 slowpoke citations.

Meanwhile, dawdlers in Florida can face not only a monetary fine by also be hit with three points on their licenses if they’re driving in the left lane at speeds of at least 10 mph below the limit.

Michigan is one of a number of states that allow police to fine motorists who continue to drive in the left lane after completing a pass. The law is seldom enforced, officials told TheDetroitBureau.com, especially in metropolitan areas like Detroit where traffic levels often require cars to spread out.

Still other states allow motorists to ride in the left lane unless other vehicles want to pass.

While critics contend the new Indiana law will encourage speeding, experts contend that left lane hogs can pose an equal risk to safety by forcing faster vehicles to pass on the right, or to merge in heavy traffic. Studies show it is safer to pass on the left, or driver’s side. Further, by forcing faster vehicles off to the right, left lane hogs create the potential of crashes with higher gaps in speed, a recipe for more serious injuries and fatalities.

“This is totally about traffic safety,” said Sen. Ginny Burdick, a Portland Democrat who supports the Oregon dawdler bill. “This is a problem that’s just getting worse out there,” she told the Oregonian.

The Oregon bill will subject left lane hogs to $160 in fines. All told, 40 states now have some form of penalty in place for slowpokes who refuse to cede the speed lane. Still others, including Ohio, are now working up similar measures.

(To see  why women are driving more miles than ever, Click Here.)