Supercar Crossover makes its debut at Goodwood Festival of Speed. 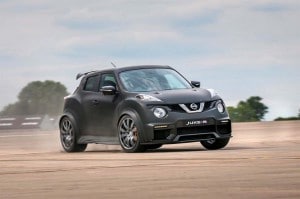 To some, it’s one of the coolest cars on the market; to others the goofiest. What’s hard to debate is that the latest update of the Nissan Juke is also the most powerful vehicle in the small crossover market.

The maker took the wraps off what it has dubbed the Juke-R 2.0 at the Goodwood Festival of Speed over the weekend, and this cross between a crossover and a sports car gets a big bump in performance.  First shown at the 2012 Paris Motor Show, the original Nissan Juke-R made a mere 545-hp. For those who want more, the Juke-R 2.0 will churn out an even more crazy 600-hp.

“The JUKE-R 2.0 is a perfect ‘crossover’ of the best bits of Nissan – real innovation showcasing our crossover prowess fused with the excitement of the GT-R supercar engine,” said Gareth Dunsmore, Marketing Communications general manager for Nissan Europe.

The debut of the 2.0 just happens to coincide with the fifth anniversary of the Juke’s launch of production. With its distinctive, if controversial, design, it has become one of the stronger sellers in the fast-growing compact crossover market.

(Nissan has big plans for NISMO performance line-up. Click Here for the inside story.) 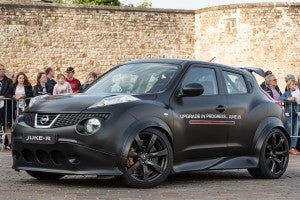 Nissan's Juke-R 2.0 at its Goodwood debut.

The Juke-R 2.0 is based on the latest version of the Juke that was launched in Europe last year. But beyond picking up the uprated GT-R NISMO engine, the crossover undergoes a number of other changes.

The front bumper, for one thing, has been revised for both aesthetic and functional purposes, among other things getting cooling apertures that are more than 100% larger than the conventional Juke. The front and rear bumpers are now made entirely of carbon fiber and, at the back end, there’s a carbon diffuser. There are rear winglets also made of carbon fiber, and revised front and rear fender wheel arch flares incorporate carbon pieces.

The headlights, taillights and hood all are lifted from the 2015 Nissan Juke, but there are new, and slightly repositioned cooling ducts in the hood to improve cooling. The Juke-R 2.0 also picks up GT-R design wheels.

As with the original Juke-R, the 2.0 is painted a matte black, and the interior now picks up a black roof liner.

Nissan has left a number of questions unanswered. We expect to see it out-perform the original Juke-R which was rated at 3.7 seconds 0 to 60, with a drag-limited top speed of 160 mph.

Nissan has not revealed pricing for the new Juke-R 2.0, either. And we’re not sure if or when it will go on sales. If it does, expect the numbers to be small. The original was measured in the dozens, rather than the thousands.