But both execs take a back seat to Fiat Chrysler’s Sergio Marchionne. 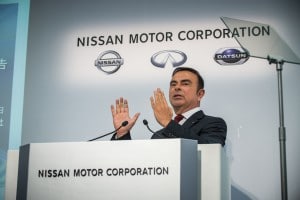 Nissan-Renault CEO Carlos Ghosn earned $8.4 million from Nissan in 2014. He earned an additional $8.2 million in compensation from Renault.

But both executives sat way back on the automotive pay chart compared to Fiat Chrysler’s Chief Executive Sergio Marchionne. Finally completing the long-promised merger of the two automakers, Marchionne was rewarded with a paycheck of 31.3 million Euros, or about $35 million.

Marchionne was the big winner among top dogs at U.S. auto companies. Mark Fields, Ford’s CEO, earned $18.6 million in total compensation: a combination of his base salary and stock awards, options and other awards. His base salary in 2014 was $1.67 million and he banked a $3.19 million bonus.

GM CEO Mary Barra earned $16.2 million in compensation, including a salary of $1.57 million, with the remainder of her pay coming in other cash compensation and stock awards. 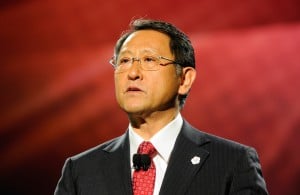 Toyota's CEO Akio Toyoda earned significantly less than his counterparts at other automakers in 2014.

That said, Nissan CEO Ghosn did quite well for an executive in Japan where pay tends to be lower, top managers often seeing much of their compensation delivered in other forms, including housing and perks like golf club memberships. But Ghosn isn’t your typical Japanese executive.

For one thing, the Brazilian-born 61-year-old runs not only Nissan, but also its French alliance partner, Renault SA. So, on top of the 1.035 billion yen, or $8.39 million, Ghosn got from the Japanese maker, he earned another 7.2 million Euros, or $8.17 million from his Renault assignment.

Ghosn, a government filing confirmed, also happens to be the largest individual shareholder in Nissan, with a total of 3.122 million shares. And he’s done well in that regard, Nissan stock climbing in the wake of an 18% increasing in operating profits for the fiscal year that ended March 31, 2015.

(Click Here for details about Sergio Marchionne’s $35 million in 2014 compensation.)

As for Toyoda, he took home 352 million yen, or $2.84 million, in total compensation. According to a regulatory filing, the grandson of Toyota Motor Co.’s founder saw his bonus double in 2014 to 249 million yen, or about $2 million.

That said, Nikesh Arora, the former Google executive now running Softbank Corp., took home a record-shattering 16.56 billion yen, or $135 million for the first half of the 2014 fiscal year, according to Reuters news service.