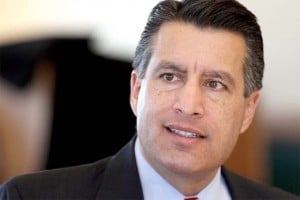 While it may be best known for its gambling industry, the State of Nevada has been making a push to take leadership in the future of the auto industry, as well.

The first state to officially license autonomous vehicles, and the home to the new Tesla Gigafactory battery plant, Gov. Brian Sandoval this week announced plans for the Nevada Electric Highway. The project will set up a network of charging stations on U.S. 95, the highway between Reno, where the Gigafactory is being built, and the gaming center of Las Vegas.

“We’ve all driven this road before and have anxiety (just) getting gas,” said Sandoval. “Now we can have confidence to charge our electric vehicles and drive them from place to place.”

It’s about 450 miles between Reno and Las Vegas, more than a seven-hour drive along sparsely populated U.S. 95. Most of today’s electric vehicles would have to stop four or five times along the way to recharge. Even the longest-range Tesla Model S sedan would have to charge up at least once.

The Nevada Electric Highway will add five new chargers along the way, on top of the 150 charging stations already in place around the Silver State. State officials are working with Tesla to set up additional fast chargers – what Tesla has dubbed Superchargers, capable of giving a vehicle like the Model S an 80% “refill” in as little as 30 minutes or less, depending upon its battery size.

(Click Here to see how Nissan and GM have found new uses for EV batteries.)

The stations along U.S. 95 will be equipped with one DC fast charger, as well as two slower Level 2 chargers using 220-volt AC. A vehicle like the Nissan Leaf or Ford Focus EV would need several hours to fully recharge at the Level 2 chargers.

Nevada officials are hoping that they can spur development along the way, with plans to work with local governments at places like Indian Springs and Hawthorne, where the new chargers could be located. The chargers will be installed for free by NV Energy, a company trying to set up a network of charging stations across the U.S. The goal is to make the facilities along U.S. 95 available for use at no charge.

Nevada officials aren’t saying how much the project will cost, but DC fast chargers can run upwards of $50,000 apiece, with the two Level II chargers likely bringing the price tag for each battery charging station to as much as $100,000 once all costs are factored in, several experts suggested.

Nevada has been investing heavily in automotive projects lately. It committed to about $1.2 billion in incentives to win the eagerly sought Tesla Gigafactory project. Set to begin production next year, it is expected to become the world’s largest source of advanced lithium-ion batteries – and eventually create as many as 6,000 jobs in the state.

Observers say it is little surprise that Nevada would want to also make it easier for owners of Teslas and other vehicles to drive battery cars in the state.

Separately, Nevada was the first state to create an official licensing program for manufacturers testing autonomous vehicles on public roads. Several companies have so far been granted license plates for their prototypes. In May, Daimler AG became the first manufacturer licenses to test an autonomous truck on Nevada roads, its Freightliner Inspiration prototype.